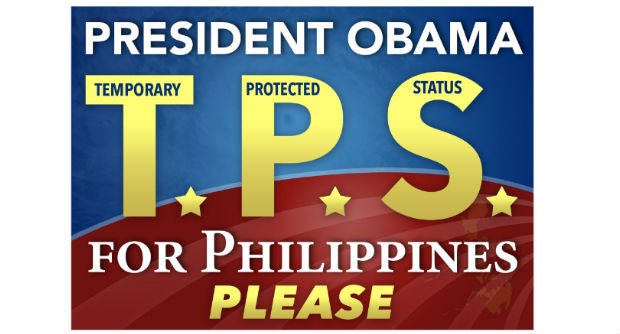 July 4 is commemorated by both countries as “Filipino-American Friendship Day.” On this day, Filipino Americans in several U.S. cities, Saipan and Guam will gather for their traditional July 4th picnics.

But in addition to their festive activities, many will also use the occasion to call attention to a critical issue related to Typhoon Haiyan: Temporary Protected Status (TPS) for some 200,000 Filipino nationals in the U.S.

TPS will help Filipinos here as well as the hundreds of thousands of victims of super typhoon Haiyan in the Philippines. Those here will be given employment authorizations and travel permits. With these, they will be able to significantly assist the Philippine typhoon victims, and otherwise.

“A grant of full TPS is an urgent and appropriate humanitarian response to the catastrophic consequences of the strongest storm in history,” says Loida Nicolas Lewis, national chair of the U.S. Pinoys for Good Governance (USP4GG).

TPS status would allow Filipino nationals currently in the United States to help their families back home rebuild their lives, Nicolas Lewis explained. “Thus, there is a compelling need to provide them with legal protections.  It has been seven months since the Aquino government asked the Obama Administration for TPS. We are calling on President Obama to please direct Homeland Security to grant TPS now.”

In Washington, DC, community organizers plan to display a huge banner in front of the White House.

“President Obama is expected to make an appearance on the South Lawn later in the early evening to greet people attending July 4th festivities and to watch the fireworks,” says Eric Lachica of the American Coalition for Filipino Veterans (ACFV). “We want Obama to see our TPS Philippines banner to urge him to kindly act to help our desperate Pinoys in the shadows.”

Adds NaFFAA National Chairman Ed Navarra: “The President’s action will be an important and symbolic affirmation of the spirit of US-Philippine Friendship. We hope he will see the historic significance of this humanitarian gesture.”

The economic impact of the TPS designation is estimated to be $1.5 billion in added remittances to the Philippines from the TPS Filipino nationals in the US.

Filipino American leaders in New York and New Jersey, San Francisco, Chicago, Houston, Maryland, Philadelphia, Texas and Virginia, including the Commonwealth of the Northern Mariana Islands (CNMI) and Guam,  are expected to mobilize their communities, display posters and banners at their events and send pictures to the White House.

In a joint-letter sent to President Obama on June 12, Filipino American community leaders noted that “July 4, 2014 is the 68th anniversary of the July 4, 1946 U.S. grant of independence to the Philippines which is now celebrated as ‘Filipino-American Friendship Day.’ Designating the Philippines as a TPS country in anticipation of that day will further deepen the friendship between Filipinos and Americans.”

Grant of TPS depends on letters to Kerry