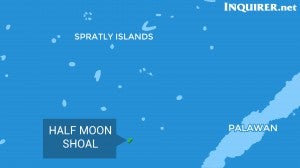 PUERTO PRINCESA CITY – The Armed Forces of the Philippines Western Command announced Friday it has rescued an abandoned cargo barge with Malaysian registry in the disputed West Philippine Sea near Hasa Hasa (Half Moon) Shoal, which is being occupied by a small unit of Philippine marines.

An advisory released by the AFP Wescom Friday morning said an abandoned Malaysian barge identified as Hub 18 was towed to the Naval Forces West Headquarters in Ulugan Bay by BRP Bacolod City (LC 550).

The statement said the barge was first sighted by Filipino fishermen drifting near Hasa Hasa Shoal and was finally found by a patrolling Islander aircraft of the Philippine Navy on Thursday some 22 nautical miles northeast of Abad Santos Shoal.

Wescom immediately dispatched BRP Bacolod City to the area where the cargo barge was sighted and towed to Ulugan Bay, arriving there Friday morning.

Wescom said it had established contact with the company that owns the vessel and learned that it’s crew were earlier rescued by a Vietnamese fishing boat.

“The owner of the barge confirmed to authorities that the crew of the barge were rescued by a Vietnamese fishing boat on June 22 and were brought to Kota Kinabalu, Malaysia. The owner expressed that a tugboat will be sent to tow the barge back to Malaysia,” Wescom said.

The barge when found was loaded with containers vans filled with used cars, spares, frozen fish and personal effects.

“At present, Wescom continues to collaborate with concerned agencies in order to ensure that lives and properties at sea are safeguarded during emergency crisis like this incident,” Wescom stated.

It also assured that the incident has not posed a threat or was a hazard to navigation.