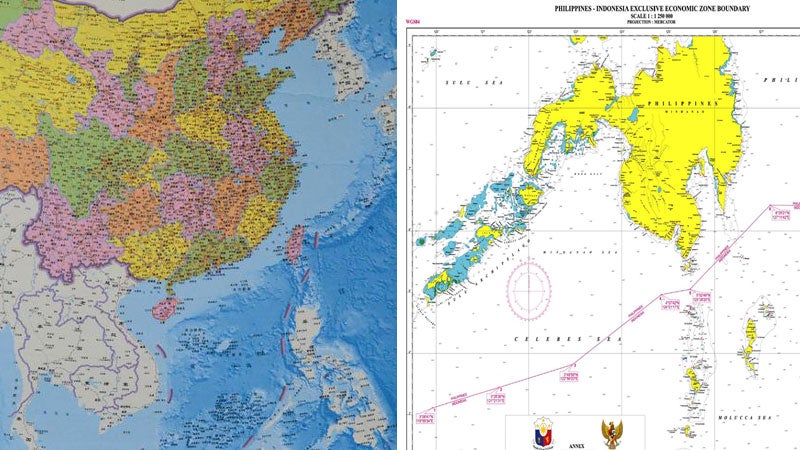 China’s new map showing their “10-dash line” claim in the South China Sea does not have specific “geographic coordinates” and is “moveable” unlike the previous maritime boundary agreement between the Philippines and Indonesia.

MANILA, Philippines—The maritime claims of China in the South China Sea has no “geographical coordinates” and is “moveable” unlike the previous boundary agreement between Indonesia and the Philippines.

“China has never clarified its nine-dash line claims. What does it mean? Is it a claim to the waters or a claim to the land features?” Department of Foreign Affairs (DFA) spokesman Charles Jose said in a press conference Thursday when asked about the difference between China’s new map and the Indonesia-Philippines maritime boundary delimitation agreement.

“The nine-dash line is moveable; there are no geographical coordinates,” he said.

The Delimitation of the Exclusive Economic Zone (EEZ) Boundary agreement between the Philippines and Indonesia was signed last May 24, 2014 and indicates eight geographic coordinates in the Celebes Sea and Mindanao Sea to clearly mark the boundaries of both countries.

A map was jointly published by Indonesia and Philippines clearly indicating in straight lines the boundary of the EEZ of both countries. It was also signed by both countries.

The agreement, which took two decades of negotiations between both countries, was regarded as a “model” for settling maritime border disputes by Indonesian President Susilo Bambang Yudhoyono.

China’s new map, which shows ten dash lines in a curved U-shape in the South China Sea and no geographic points, is regarded by Malacañang as just a “drawing” and that it does not have any bearing.

“No country in the world recognizes the nine-dash line claim of China,” Jose said.

The claim has also been previously challenged by Philippines before the International Tribunal on the Law of the Sea (Itlos) by filing an arbitration case. China has refused to participate in the proceedings and insists on bilateral talks citing their “indisputable sovereignty.”

Read Next
US ends Philippines anti-terror force
EDITORS' PICK
House energy committee chair Arroyo bats for cheap electricity
Honolulu Café is the cure for your Egg Tarts and Roastings cravings
Petition to reverse Comelec decision on Bongbong Marcos’ DQ case reaches SC
Luxe property: A way to build, preserve wealth
PH detects local transmission of Omicron subvariant BA.2.12.1
OVP: Pilot’s claim vs Robredo ‘never happened’, a ‘malicious fabrication’
MOST READ
Man posing as Marcos spox revealed to be an inmate in Bilibid — Guevarra
Heart Evangelista gets a ‘no’ from Chiz Escudero after asking, ‘Do I deserve a bag?’
Congress canvassing of votes for president, VP to begin May 24
3 Iloilo residents found with Omicron subvariant
Don't miss out on the latest news and information.