BI agents nab one of US’ most wanted 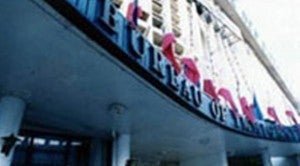 MANILA, Philippines–The Bureau of Immigration (BI) has captured one of America’s most wanted and four other American fugitives in a series of arrests in Metro Manila and nearby provinces this month.

Elbert Kyung Ma, alias Andrew Lee, who was convicted of manslaughter in California, was arrested in Barangay (village) Commonwealth in Quezon City by BI intelligence operatives after months of surveillance, according to Immigration Commissioner Siegfred Mison.

The 32-year-old Ma was described as one of America’s most wanted. US authorities had also been looking for him for a parole violation in connection with the charges of homicide, illegal possession of firearm, fraud and driving under the influence of liquor he was facing, Mison said.

Records showed that Ma flew to the Philippines in July 2011 on a tourist visa and failed to secure an extension for 22 months.

The US Embassy informed the BI that Ma’s US passport had been canceled by the Department of State and that he had been declared a risk to public safety and interest.

US authorities had been hunting Ma for the stabbing death of Brian Lee outside a 24-hour gym in Buena Park three years ago. Investigators said the attack ensued after an argument over a debt.

During the arrest, the BI agents confiscated Ma’s Philippine Alien Certificate of Registration and various identification cards, including a professional driver’s license and company ID saying he was a regional manager of Manpower Phil Inc. based in Makati City.

The BI has placed Ma on its alien blacklist. He is now the subject of summary deportation.