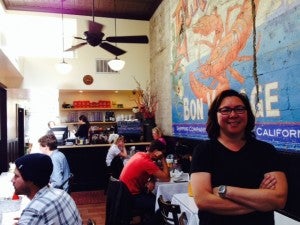 SAN FRANCISCO, California — “I’m a Filipina Yat,” proudly declares Brenda Buenviaje, chef and co-owner of Brenda’s French Soul Food Restaurant in San Francisco.  The term Yat is derived from a common New Orleans greeting, “Where y’at? (“Where are you at?” or “How are you?”), and refers to New Orleanians who speak a local English dialect.

Buenviaje has come a long way from the restless New Orleanian who did not bat an eyelash when she decided to try her luck in one of the gourmet meccas in the country.  Throughout the last two decades, she has remained true to her passion, trying her hand at a series of San Francisco restaurants, tackling diverse cuisines from Asian fusion to Italian to French to Southern, earning accolades along the way. In May 2014, Thrillist, a popular lifestyle blog, named Brenda’s French Soul Food as one of the “21 Best Southern Restaurants Outside the South.”

Buenviaje is the daughter of a Filipino-Creole mother of French and Italian ancestry and a Filipino father from Cavite, a member of the US Navy who came to New Orleans in the 1950s.  Her father died when she was just a baby.  Her Filipino maternal grandfather was a shrimper and lived in the lower coastal areas of south Louisiana.

The first Filipino settlements in the U.S. formed in 1763 when Filipino sailors jumped ship to escape the oppressive conditions on Spanish galleons plying the Manila – Acapulco trade route.  These men lived along the Louisiana coast, built homes on stilts, and worked on shrimp boats.  A number of historical sources have credited them with initiating the shrimp-drying industry in the state.

“Growing up in New Orleans in the 1970s was not easy,” Buenviaje recalls.  She and her siblings were the only Asians in their elementary and middle schools.   Because she was neither black nor white, she was often called the generic racial slur “Chink.”  The teachers made fun of her name because they could not pronounce it, and in first grade, they had assumed that she did not speak English and considered putting her in a remedial class.

“They just looked at me, saw my eyes and made their conclusion,” Buenviaje recalls.   She surmises that they changed their minds after overhearing her in the schoolyard, talking with a Yat accent.

The smells and tastes of food from her multicultural heritage and the profusion of wildly grown ingredients surrounded Buenviaje when she was growing up.  Besides typical New Orleans dishes like gumbo and crawfish etouffée, her mother also made adobo and pancit and was addicted to lumpia.

“I think I was born knowing how to make them,” she says laughing.  “We’d roll them for hours and freeze them.”  Her Filipino stepfather would cut leaves off their banana tree and steam sweet rice wrapped in those leaves.  Every two years, he would roast a whole pig overnight.

Buenviaje became an early forager, tagging along whenever her family went crabbing or crawfishing.  She also picked wild blackberries and gathered pecans. “We did not have much money, so we were always out looking for something to eat,” she explains.  Despite these rich food experiences, becoming a chef never entered her mind until she was in her mid-twenties.

After receiving her Bachelor of Fine Arts in painting and drawing from the Louisiana State University in Baton Rouge, Buenviaje began working as an artist.  “Although I felt that I could have made a career out of it, studio work became lonely and tedious.  I needed more community in my life,” she states.  To take a break from painting, she started cooking as a hobby.  Her decision to work full-time as a chef was serendipitous.

A friend had left at her home the cookbook, “The Frugal Gourmet Cooks Three Ancient Cuisines: China, Greece, and Rome,” which she read from cover to cover.  She declares the tome became her re-education, allowing her to understand the world better through food.  “I became obsessed with cooking and wanted to try making all the recipes in the book.  It caused a shift in my head.“

Chef in the making

At 25, Buenviaje left her budding career in art and started working as a chef in New Orleans, when Asian fusion cooking was just taking off.   Although she started getting recognition for her culinary talent, she had to pay her dues in male-centric kitchens.

“In one restaurant,” she relates, “a kitchen worker, formerly with the military and much older than I was, loved to humiliate me by telling stories about prostitutes.”  She was ignored by people she was supervising, had been pushed and had doors slammed on her. “None of this ever happened to me when I moved to San Francisco,” she states.

In 1997, Buenviaje joined Mike Fennelly, owner of Mike’s on the Avenue in New Orleans, where she was chef de cuisine, on a trip to New York to cook dinner at the James Beard House, a prestigious invitation in the culinary world.  While in a cab, Fennelly asked her whether she’d like to move to San Francisco.  Two weeks later, she packed up all her belongings and left her hometown.  “That’s what you do when you’re 28,” Brenda says.

After a stint at Fennelly’s short-lived venture, Buenviaje ended up working at Oritalia, where she received excellent reviews.  She spent the next ten years honing her cooking chops at Sumi, Café Claude and DeLessio Market and Bakery.  She also became consulting chef at Snooze in Denver, Colorado.

Becoming her own boss

In 2007, wanting to become her own boss, Buenviaje finally opened Brenda’s French Soul Food on the fringe of San Francisco’s seedy Tenderloin, which is now undergoing gentrification.  The casual dining restaurant, which initially seated only 28 guests, has expanded to the storefront next door to respond to a cult following hungry for crawfish beignets, shrimp and grits, oyster hangtown fry and fried chicken.

To serve other Southern specialties, she recently added, two doors away, Libby Jane Cafe, named after her wife and business partner Libby Truesdell.  In 2015, they plan to open Brenda’s Original Po’ Boys in the Fillmore area, another up-and-coming dining scene in the San Francisco. 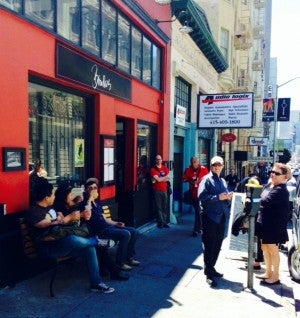 Although she has built her career doing cuisines other than Filipino, Buenviaje has managed to sneak in a Filipino dish now and then, mainly to satisfy her own craving.  At Delessio, she served chicken adobo that became so popular that she had to do a hotline to let customers know which day she’d be featuring it on the menu.  Recently, to test the waters, she ran a crawfish lumpia special at Brenda’s.  The dish quickly sold out, and since then guests have been clamoring for its comeback.

Buenviaje came to our interview at Libby Jane with her three-year-old  daughter Aurora.  She also has a son, 13-year-old Max, from a previous relationship. Asked how she’s been able to juggle having a family and taking care of her growing restaurant empire, she says, “I get a lot of support from my wife.  Also, I’ve been in this industry long enough to know how I’d want to be treated when working for someone else.  We empower employees instead of micromanaging them, and in return we get a lot of loyalty and little turnover.”

Taking this approach has allowed her to enjoy time with her family and focus on other projects like the upcoming Fillmore restaurant as well as causes close to her heart. For the past several years, Buenviaje has been a mainstay in fundraising events benefiting organizations serving Asian and LGBT communities.

Still, she gets some flak for being an Asian woman cooking Southern food.  She relates that a man once called her restaurant and harassed them for “appropriating other people’s cuisine.”

Choosing to rise above the fray, this Filipina Yat states, “Now there is so much cross- culture in ingredients in Southern cuisine that one can’t say anymore that one group owns that cooking.  I just want them to come taste my food and then talk to me about it.”