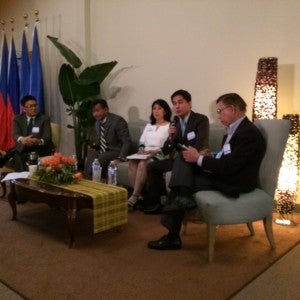 SAN FRANCISCO, California – In a daylong business conference June 20 Philippine officials, private business leaders, startups and social entrepreneurs discussed the Philippines’ economic health, business opportunities as the well as political and regional challenges that could stand in the way of the country’s continued economic surge.

Called the Latitude/Longitude Business Conference, the gathering at the Philippine Center gallery was hosted by the Science and Technology Advisory Council – Silicon Valley (STAC-SV) for the second year, in time for the celebration of Philippine Independence and building on the success of the first conference last year.

New Consul General Henry S. Bensurto Jr. expressed confidence that the reforms that have led to the growth surge “will persist beyond the Aquino government” and that the administration is committed to “inclusive growth” that helps alleviate poverty.

He also underscored the “growing confidence in private-public partnerships in infrastructure development as a result of the administration’s drive against corruption.

Later in a panel discussion, Bensurto, a leading expert on maritime security and the West Philippine Sea dispute, stressed that the “peace infrastructure” in the area is crucial to economic development. Should armed conflict make the sea-lane dangerous for international shipping, consumers will bear the burden of hiked shipping insurance premiums, higher security expenditures, etc.

“The Philippines is entering a so-called sweet spot in 2015,” added Trade Commissioner Jojie Dinsay, “when the majority of the population will be joining the labor force.” 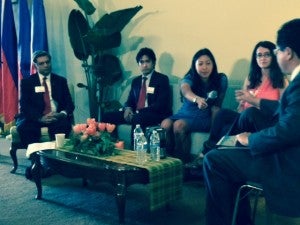 Dinsay laid out the country’s economic strategy, which focuses on agriculture and manufacturing; food, health information management, information technology and design (furniture, home décor, etc.).  The business process outsourcing sector, he said, is projected to absorb 4.5 million full time employees by 2016, while remittances from the diaspora remain the biggest contributor to the economy.

The rest of the day say presentations on new global business models are helping build communities. There were also panels featuring representatives of companies founded by Filipinos and Filipino Americans, such as Aeluros, OVS, Narra Systems, OncoSynergy and American Science Products.

Nonprofits contributing to Philippine economic and social development, such as PhilDev and Gawad Kalinga, explained their missions and progress. A panel on Filipino women business leaders featured leaders from Zero Divide, Bank of America, Consultthread, and VuQo Inc.