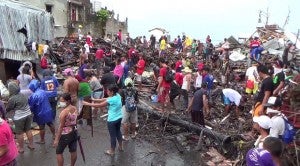 MANILA, Philippines—The Philippines is one of the most disaster-prone countries in Asia that have made “striking paradigm shifts” in disaster risk reduction and management, according to the head of the Geneva-based United Nations Office for Disaster Risk Reduction (UNISDR).

“Even though Cyclone Haiyan claimed over 6,200 lives when it struck the Philippines, many more were spared because of early warnings and evacuations, particularly in the province of Cebu,” she said in a statement issued the day before the opening of the 6th Asian Ministerial Conference on Disaster Risk Reduction in Bangkok.

Like the Philippines, Bangladesh “has one of the best cyclone preparedness programs today, having lost hundreds of thousands of lives in the past,” Wahlstrom pointed out.

Indonesia, for its part, “has made disaster risk reduction a pillar of its national development policy,” she said.

“A similar revolution needs to take place in managing disaster risks across public and private sectors in the region in order to stop the hemorrhaging of assets and wealth caused by disasters,” she emphasized.

According to the UNISDR chief, “there are encouraging signs that the business community across Asia is alert to the issue.”

“Just last week in Manila, one of the region’s most respected land developers, Hans Sy, said: ‘We need to bridge the gap in understanding and convince business owners of the need to move beyond basic continuity planning and to consider the opportunity to create value in markets with products that address disaster risks and the important role of public-private sector partnership in disaster recovery,’” she said.

Wahlstrom reported “reducing economic losses will be a significant part of the great debate which we expect to have in Bangkok next week.”

“The ripples from that debate will be felt beyond the recommendations for a new framework for disaster risk reduction across the whole post-2015 development agenda, which includes new sustainable development goals and a universally accepted agreement on climate change,” she said.

Some 2,500 delegates from more than 39 countries in Asia-Pacific will be tasked to “shape future efforts to build more resilient communities and nations” during the UNISDR conference in Bangkok next week.

“The outcome of the meeting will have long-term significance for the world at large as the recommendations will feed into a new global agreement on disaster risk reduction, which will replace the current Hyogo Framework for Action which was adopted in 2005 by all UN member-states following the Indian Ocean tsunami,” said Wahlstrom.

The UNISDR head asserted “when Asia speaks on disaster risk management, the rest of the world listens. The region suffers more than 80 percent of the world’s disaster events.”

“Nine of the world’s 10 most significant natural disasters by fatalities last year occurred in the Philippines, India, Pakistan, Japan and China. Some 14,500 lives were lost in tropical cyclones, floods, heat waves, and earthquakes,” she said.

According to Wahlstrom, “reported economic losses totaling $50 billion accrued in China, the Philippines, Indonesia, India and Pakistan last year. And the overwhelming majority of the 95 million people whose lives were disrupted by disasters worldwide last year live in the region.”

“It could have been a lot worse. Untold thousands of lives are being saved every year, particularly in weather-related disasters as early warning systems, better disaster preparedness and more efficient response systems are now in place across much of the region,” she added.

‘Gov’t, private sector should be partners’