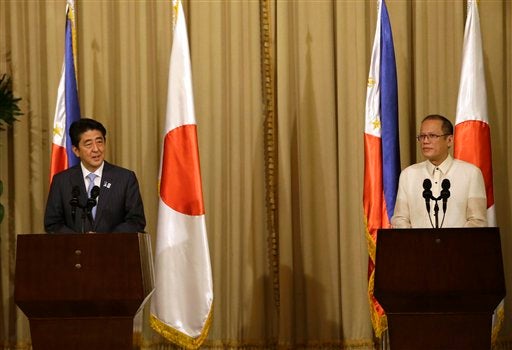 President Aquino (right) and Japanese Prime Minister Shinzo Abe are scheduled to hold talks in Tokyo next week in a summit meeting between leaders of two countries locked in territorial disputes with China. AP

MANILA, Philippines–President Aquino and Japanese Prime Minister Shinzo Abe are scheduled to hold talks in Tokyo next week in a summit meeting between leaders of two countries locked in territorial disputes with China.

No details have been released about the Aquino-Abe meeting on June 24 at the prime minister’s official residence in Tokyo.

“We are still awaiting further information on the agenda of the meeting,” Communications Secretary Herminio Coloma Jr. said in a press conference.

Aquino was also invited by Abe to deliver the keynote address at the Japan International Cooperation Agency (Jica) international conference in Hiroshima.

Aquino will fly back to Manila after speaking in Hiroshima.

Jica opened an office in the Philippines in 1974 and has since facilitated numerous assistance programs in the country.

Jica’s website says the agency “provides cooperation in economic growth, poverty reduction, disaster mitigation, other development issues, such as health and governance, and in promoting peace and development in conflict-affected Mindanao.”

The Aquino-Abe meeting follows a resurgence of territorial quarrels in the East China and South China Seas, heightening tensions in the disputed areas.

China lays claim to Japanese-administered islets in the East China Sea, known as Senkaku in Japan and Diaoyu in China.

The row was the latest flare-up in the territorial dispute between Asia’s largest economies.

Last November, China declared its air defense zone covering most of the East China Sea despite protests from Japan and the United States.

China has also been building artificial isles in the South China Sea areas claimed by the Philippines and called by Manila as the West Philippine Sea. The Chinese action has drawn protests from Manila.

The Philippines said China’s land “reclamation” violated an informal agreement with the Association of Southeast Asian Nations (Asean) to keep the status quo in the South China Sea until a binding code of conduct among claimant nations was reached.

The Philippines is taking what Manila officials describe as “diplomatic, political and legal options” toward a peaceful resolution of the maritime row.

Critics have said that while avoiding a military confrontation with China, the Philippines must do more to protect its territories.

“Government is doing what is deemed necessary to be able to continue asserting our sovereignty in the areas that you are referring to,” Coloma told a reporter.

He said the Philippine Coast Guard was conducting periodic patrols “in all the waters of our archipelago,” along with the Bureau of Fisheries and Aquatic Resources, to show the country’s flag.

“These activities continue and are not affected by concerns on issues pertaining to disputes in the West Philippine Sea,” Coloma said.

Asean-Japan summit gets under way in Tokyo

West PH Sea disputes up for discussion in Japan-Asean summit