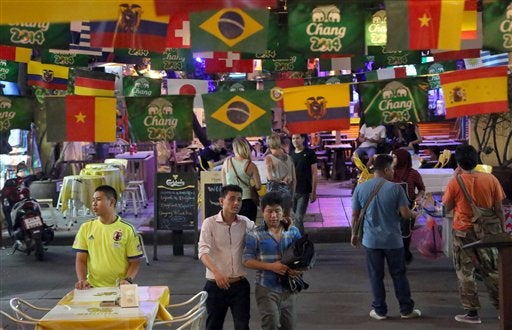 Tourists and locals make their way in Bangkok’s Khaosan road, Thailand, Saturday, June 14, 2014. The generals who seized power in Thailand have lifted a nationwide curfew, giving a green light for the capital’s red-light districts, nightclubs and pubs to roar back to life. AP

MANILA, Philippines — The Department of Foreign Affairs has lowered the crisis alert level in Thailand amid improving political situation in the strife-torn country.

“Given the continuing normalization of the political situation in Thailand, including the lifting of the curfew nationwide last June 13, Foreign Affairs Secretary Albert del Rosario lowered the crisis alert level from 2 to 1,” the DFA said in a statement Monday.

“The ban on the deployment of overseas Filipino workers, whether rehires or newly-hired, will be lifted,” it also said.

Crisis alert level 2 was raised in Thailand last May following the declaration of Martial law by the Thai military.

The unrest has been continuing since Thailand’s former PM Yingluck Shinawatra was ousted by the court for abuse of power.