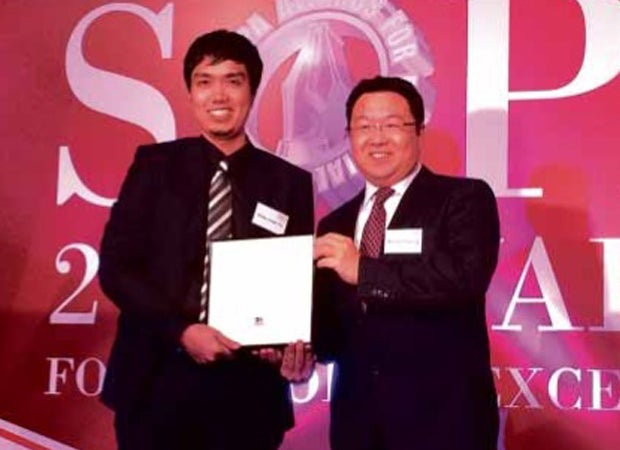 INQUIRER reporter DJ Yap (left) receives a plaque for his story “Meeting a monster,” a first-person account from his coverage of Supertyphoon “Yolanda” and its aftermath.  CONTRIBUTED PHOTO

It was the first time for the Inquirer to have won an award in the feature writing category. Since 2003, the paper has collected 12 Sopa awards, including awards of excellence in specialized reporting, opinion writing, and the scoop, as well as honorable mentions in breaking news, investigative reporting and news photography.

The Inquirer is the only Philippine publication to compete in Sopa.

Sopa, an organization dedicated to best practices in professional publishing, created the Sopa Awards in 1999 “as a tribute to editorial excellence in both traditional and new media” in the Asia-Pacific region.

“Meeting a Monster,” Yap’s account of his experience being stranded in Tacloban City for many hours after the storm smashed into the Eastern Visayas on Nov. 8, 2013, received an Honorable Mention for Excellence in Feature Writing.

Another Inquirer reporter, Nancy C. Carvajal, was a finalist in The Scoop category for “They laughed while firing,” her series of exclusive reports on the Balintang Channel incident on May 9, 2013, when the Philippine Coast Guard opened fire on a Taiwanese fishing boat, killing a Taiwanese fisherman.

The panel of judges described Yap’s story on Yolanda (international name: Haiyan) as “a model of deadline-driven feature journalism amid horrific conditions—vivid, impassioned, heartrending and tragic.”

The piece, which appeared on the front page of the Inquirer on Nov. 17, 2013, described the mayhem and misery that engulfed Tacloban when it was hit by the strongest storm ever to make landfall, as well as the reporter’s observations and account of the problems he encountered during the coverage, in which he was teamed with photographer Niño Jesus Orbeta.

Yap, who covers the environment beat, and Carvajal, who is assigned to the National Bureau of Investigation, attended the gala dinner at the Hong Kong Convention and Exhibition Center, where Sopa presented 99 awards in 18 categories across three divisions. A total of 99 publications joined the awards this year, submitting a record 676 entries.

“A strong number of entries have been received this year from across Asia. There has been an increase in the number of English-language entries which is very encouraging,” said Sopa chair David Smith.

“Entries, whether in English or Asian languages, reflect the vibrancy and diversity of journalism across Asia as the region modernizes and liberalizes in a number of important aspects,” he said.

The Award of Excellence in Feature Writing went to Keith Zhai of the Hong Kong-based South China Morning Post for his story, “Bo’s descent into darkness,” which chronicled the fall of Bo Xilai, the disgraced former China Communist Party leader who was once tipped as a future leader of the country while an official of the party’s Chongqing branch.

There are only two winners for each award category: the award of excellence and the honorable mention.  Zhai and Yap bested the third finalist in their category, Radha Basu of the Straits Times, who was nominated for her story on the demands of giving care to Singapore’s elderly folk.

Awards are given in three divisions: English-language regional publications, large magazines and wire services (Group A); national newspapers and small magazines in English (Group B); and Chinese-language publications (Group C).  The Inquirer competes in Group B, which this year was dominated by the South China Morning Post, winning 10 awards, followed by the Phnom Penh Post, which took home four. The Straits Times and Korea Times each won three awards in this group. The Bangkok Post won two, while no major English-language newspaper from Jakarta and Kuala Lumpur took home an award.

In Group A, Reuters and the International New York Times competed for the most number of recognitions, with eight and seven, respectively. Bloomberg News received four awards. The Associated Press (AP) won only one, but it was the top journalist award. The AP’s Todd Pittman was chosen Journalist of the Year for his reportage on Supertyphoon Yolanda in the Philippines, and the attacks on Muslims in Burma (Myanmar).

Jeffrey Timmermans, director of the undergraduate journalism program of the University of Hong Kong’s Journalism and Media Studies Center, headed the panel of 123 judges. The judges included top journalists and academics from the New York Times, TIME Asia, the Wall Street Journal, Stanford University, Columbia Journalism School, and University of Michigan, among others.

“The news organizations that vie in this annual contest cover the world’s most newsworthy region, politically and economically,” said Tom Leander, who chaired Sopa’s 2014 editorial awards committee. “That’s why stories from this part of the world are increasingly prominent in the global marketplace of ideas,” he said.

Leander noted that reporters put their lives on the line to perform their jobs. “In 2013, five were killed in Pakistan, three in the Philippines, three in India, and one in Bangladesh, all proven of suspected murders, according to the Committee to Protect Journalists,” he said.

A special toast was raised at the dinner in honor of veteran investigative journalist Kevin Lau, former editor of Hong Kong’s Ming Pao daily, who last February survived multiple stabbings by men believed to have links to organized crime.