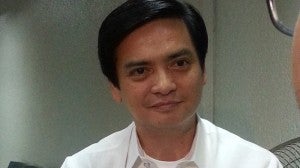 MANILA, Philippines – The Department of Foreign Affairs (DFA) has filed a new protest against China’s reclamation in the McKennan reef (Hughes reef) in the West Philippines Sea (South China Sea).

“It was earlier confirmed that reclamation is being done,” DFA spokesman Charles Jose said in a press conference Friday.

He said the protest was filed “last week.” China has not yet responded to the protest.

Previously, President Benigno Aquino III said that Chinese ships were seen moving around Gaven and Cuarteron reefs presumably with the intention of conducting further reclamation on those reefs.

When asked if there were aerial photographs showing the latest reclamation activity on McKennan, Jose said he has not yet seen them.

DFA last May released a series of aerial photographs showing the progression of reclamation on Mabini reef (Johnson South Reef).

The Philippines has also filed a protest against China about the reclamation on Mabini but China has rejected the protest.

A total of five reefs are now undergoing, or believed to be undergoing, reclamation: Mabini, Gaven, Cuarteron, Malvar and Mckennen.

Reclamation activities by China are seen as “provocative and unilateral action in the South China Sea” and “lend credence to it pursuing an aggressive expansion agenda,” Jose said.

“A reef per se cannot sustain human habitation and economic life on its own. Artificially changing its character to an island by reclamation could be intended to change its maritime entitlement. Under international law, it is the original and natural character of that feature that should be considered” he said.

The Philippines has an ongoing arbitration case against China seeking to invalidate its nine-dash line claim over nearly 90 percent of the South China Sea including part of the Philippines’ 200-nautical mile exclusive economic zone.