Unlike natural disasters, their damages can be prevented—EU official 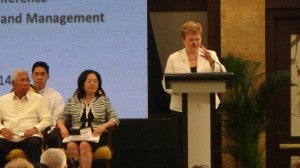 MANILA, Philippines—Even in the face of the largest natural disasters, one European Union official said that there is a stop to the “devastating damage” that nature lays down.

Kristalina Georgieva, European Union Commissioner for International Cooperation, Humanitarian Aid and Crisis Response, said Thursday at the Asia-Europe Meeting (Asem) at the Diamond Hotel that there is no possible way to stop disasters but there is a way to prevent any disastrous damage.

“We can’t stop the disaster but we can prevent them from causing devastating damage,” Georgieva said.

“We can build preparedness and prevention.”

She added that one key to prevent the “devastating damage” is to turn the pyramid of investment on disasters upside down, giving more importance to preparation than response.

Georgieva said that currently, only four percent of funds are used for preparation and prevention and that 96 percent are allotted for response.

She said that if the “pyramid” is turned down, nations and governments could save 400 to 700 percent.

“We need to get a mindset to turn around our future towards more security and stability,” Georgieva said.

She hoped that by 2016, disaster preparedness and response would change for the better.

Georgieva pointed out three keys for the attainment of such goals; investment requirements for damage prevention, emphasis on helping communities, and international cooperation.

“International Cooperation is the next step forward,” she said after witnessing the damage that super typhoon “Yolanda” (international name: Haiyan) laid down on Eastern Visayas. “No country is rich enough.”

To support her three keys, she also stressed five “integral” principles; information that the people are equipped with, focus on the results, the mindset that disaster risk reduction contributes to growth, focus on the children, women, and the elderly, and that the United Nations Office for Disaster Risk Reduction conference in Sendai, Japan in 2015 would “set the world in the right course.”

PH can learn from Japan about disaster preparedness