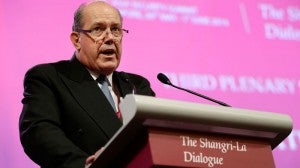 Australia’s Defense Minister David Johnston gives his speech about “Managing Strategic Tensions” on Saturday, May 31, 2014, in Singapore during the Asia Security Summit in Singapore, known as the Shangri-La Dialogue.  AP

MANILA, Philippines—The Philippine government continues to become emboldened by the support of the international community, especially with the recent statements of Australian Defense Minister David Johnston, against China’s expeditions in maritime conflict.

However, it is also cautious of stepping heavily on China’s sensitive toes, emphasizing instead the importance of peaceful resolution to the centuries-old territorial disputes in West Philippine Sea (South China Sea).

“In the 13th Asia Security Summit held over the weekend in Singapore, the participants affirmed the importance of respecting the rule of law as the key to regional stability. The Philippines’ key allies namely the United States, Australia, and Japan expressed similar views that support our country’s basic position on the importance of seeking peaceful settlement of disputes,” Communications Secretary Herminio Coloma Jr. told reporters on Tuesday.

During the summit, Johnston accused China of destabilizing the region through its actions in claiming South China Sea. He said US, Australia and Japan are all “very concerned” with China’s “unilateral actions.”

“We are encouraged by the supportive statements of our allies and other countries on the importance of seeking peaceful settlement of disputes, which is precisely the course of action we have chosen to adopt,” Coloma said.

The Philippines is among the several countries holding overlapping claims in South China Sea. Recent actions by Chinese ships had led its neighboring countries to seek international mediation.

Coloma reminded media of President Benigno Aquino III’s statement on the importance of freedom of navigation and aviation in the disputed areas, which hosts 40 percent of the world’s commerce.

“We still would like to envision a situation where there will be continuing stability in the South China Sea, as we have pointed out its strategic importance not just to regional, but to global commerce and trade,” he added.

The Secretary, however, pointed out that the territorial disputes do not define the country’s relations with China, which remains a major trading partner of the Philippines.

“Other countries in the region also view it that way, and this is the condition that we see for further stability and economic growth in our region,” he explained.

Amid statements from the country’s western allies, Coloma insisted that the Philippines’ centrality is with the Association of Southeast Asian Nations.

“Together with the other Asean nations, we are advocating the fleshing out of the Code of Conduct. We see this as the important opportunity for institutionalizing peace and stability in the region arising from the disputes in the South China Sea,” he said.

He said the country’s decision to raise the issue through the United Nations Convention on the Law of the Sea was a way to inform the world of the government’s position.

“We want to engage the attention and participation of other countries that are signatories to that treaty,” he said.

Coloma said the government believes that it is also in the interest of China to maintain peace in the region for the benefit of the economy.