US military assisted PH forces during Battle of Zamboanga 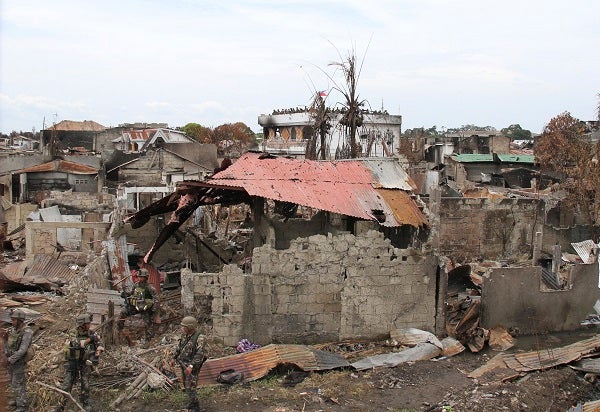 Government troops stand by the ruins at the site of a three-week intense fighting between government forces and Muslim rebels Sept. 28, 2013, in Zamboanga City. AP FILE PHOTO

ZAMBOANGA CITY, Philippines — A US military unit stationed in Mindanao assisted Philippine soldiers with “information and communication assets” during a 23-day battle between government troops and renegade guerrillas of the Moro National Liberation Front here in September last year.

US Ambassador to the Philippines Philip Goldberg made the admission here during Monday’s ceremonial turnover of command of the Joint Special Operations Task Force Philippines (JSOTFP) here.

“During that period the JSOTFP provided vital information, communication assets to help Philippine forces,” Goldberg said in his speech. “The constructive relationships with the military and civilian leaders here were critical in enabling JSOTFP team members to provide situational awareness to our partners and also to the embassy, which contributed to the arrest of over a hundred fighters that were involved in that attack by the MNLF.”

It was “a monumental opportunity” to have been part of the resolution of the monthlong siege of Zamboanga City, McDowell told the Philippine Daily Inquirer in an interview.

“It represented what we worked together for so many years, shoulder to shoulder, that will make a difference. To be a silent hero, it’s really quite an honor. It is the fact that I was able to be part of it and I will never forget it,” he added.

McDowell also lauded the sacrifices made by the members of the Armed Forces of the Philippines despite the limitations.

“What I have seen is the Philippine armed forces are very capable in rendering aid and assistance to the Filipino people, and they are very capable of eliminating a threat and they care much about their country,” he said.

“I think what they did in Zamboanga was more phenomenal than what most US troops could have done with such little notice. They performed brilliantly,” Mc Dowell added.

Mayor Maria Isabelle Climaco Salazar said the American soldiers provided maps and latrines at the height of the siege.

“They supported in terms of maps. They were  the first group to give us latrines (for the evacuees),” the mayor said.