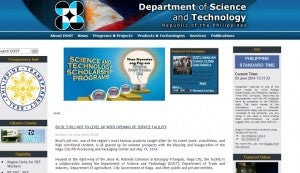 MANILA, Philippines – At least 32 personnel left  the Department of Science and Technology (DOST) for “high paying” jobs in other countries,  an official told a Senate hearing on Tuesday.

Of the number, majority are forecasters, few are sub-professional level, and about five sub-professionals, said Vicente Malano, officer-in-charge of the Philippine Atmospheric Geophysical and Astronomical Services Administration (Pagasa), one of the government agencies under the DOST.

“From 2005 up to present, there are already 32 personnel, who have gone abroad, most of them are forecasters, few are sub-professional level and less than I think, there were only 5 sub-professional,” Malano said, responding to Senate Pro Tempore Ralph  Recto’s query during  the hearing of the Senate committee on science and technology.

The mass exodus, however, has not only been confined in Pagasa but in other-related agencies as well like the Philippine Institute of Science and Volcanology (Phivolcs) and the Advance Science and Technology Institutes (Asti), said DOST assistant secretary Oswald Santos.

“Nangyayari rin po sa ibat ibang ahensya ng DOST like Phivolcs (Philippine Institute of Volcanology and Seismology) and some other agencies like ASTI (Advance  Science  and Technology Institutes because of the temptations being offered by companies in other countries for higher paying jobs,”  Santos said.

Ramon Agustin, president of the Philippine Weathermen Employees Association (PWEA), said the “brain  drain” was  “alarming” as there were more  employees,  four  in 2014, leaving  the  agency compared to only one to two personnel the previous years.