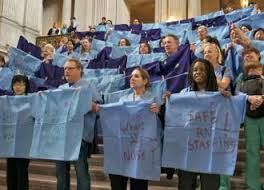 SAN FRANCISCO, California – Nurses, mostly from this city’s San Francisco General Hospital, rallied on the steps of San Francisco City Hall last week to protest what they believe has been a lack of transparency on the part of city leadership.

The group assembled on the steps of the golden-domed building, where the protesters marched up its stairs to the door of Mayor Ed Lee’s office.

They put on a show of defiance over unexplained vacant nursing positions, proceeding to dump out a large amount of cut-out paper scrub suits.

Lee was not present; in fact, the door was locked. However, a representative for the office acknowledged the act of solidarity and promised to convey their message to the mayor.

In the rally, the nurses alleged that City Hall has undermined patient care in its refusal to fill up positions for the 235 nurses that have been approved in the budget but whose hiring has been stalled.

The group points to an unsafe ratio of nurses to patients in City facilities which, as a result, degrades patient outcomes and gives rise to incidents of abuse by patients against other patients, health workers and even visitors.

“There are over 200 vacant positions and we want those filled. Originally, we were told there was a hiring freeze,” Nordissa Cooper, a registered nurse at SFGH since 2008, told FilAm Star.

“We are confused as to why they have not been hiring as these positions have already been filled in the budget. They save $16.9M in the budget by not filling these positions, but we want them filled now for the delays jeopardizes the patients’ and also health workers’ safety, including that of nurses.”

Meanwhile, health care workers from across the San Francisco Bay Area earlier staged a rally at Highland Hospital to raise the same issue of their safety that has worsened in recent years.

In a statement, they protested what they called “a growing epidemic of violent assaults against caregivers today.

“The health care workers are calling for improved protections for staff and patients at Alameda Health System (AHS), which has seen a jump in incidents of reported workplace violence in recent years, up to 76 different attacks last year.

AHS runs Highland, John George, and Fairmont Hospitals along with community health clinics. John George Psychiatric Hospital was the sight of a killing of a doctor — beaten to death in a private examination room — nearly a decade ago.

While that assault led to a temporary increase in security, the conditions there and at other Bay Area hospitals has since deteriorated, making healthcare one of the most dangerous occupations.

RNs at other Bay Area hospitals have been killed at work in recent years and are calling on the state legislature to take action,” the statement said further.

To avert further danger, they specifically called for an increase security staff and have programs in place to prevent weapons from brought in, including the installation of metal detectors at some sites; enhance staffing for patients with a history of violence; and involve frontline caregivers in the efforts to respond to the epidemic of violence.

For his part, Filipino oncology registered nurse of SFGH Brian Levardo admitted that they are aware of the occupational hazards faced as part of their duties but did not think of its actual extent.

“As Filipinos, we know the value of hard work,” said Levardo to FilAm Star. “We try to do what’s right by our patients. No matter how busy, we always give our best effort to ensure our patients are properly cared for. It is hard enough that we are over-worked and severely under-appreciated, but to add verbal and physical assault to the picture is just too much.”

Last year alone, he said, 31 employees filed for workers’ compensation due to assault. “How many others, do you think, just let it slide? What about our patients? How many of them had to suffer physical or verbal assault? At some point, enough has to be enough.”

Levardo added that despite the adversity, Filipinos know the meaning of perseverance and that the reward accompanying the care for people in their most desperate of times far outweighs the challenges of our workplace. That is why although the job is physically and emotionally taxing, on many levels, they are there for the patients and there is no other place they’d rather be.

A recent victim of abuse by a patient also attended the rally to lend support for its causes and related her own harrowing experience, giving a vivid account of the events.

“The patient was in the nurse station talking with other nurses and might have gotten upset about something,” Rhia de Padua said. “While I was trying to go to the medication room, she twisted her hand around my hair and pulled it. That was when the other nurses rescued me… That was the first time I have seen that patient and she was not joking, she was serious for it took around three staff members to separate us.”

De Padua revealed that nothing has been done since the incident occurred in February, even though she called on the police and made an unusual occurrence report about it.

Levardo assured that this will not be a “ningas-cogon thing” and they would continue to fight for improvements in the substantial staffing of nurse and safety of patients and health workers alike.

“What we would like is for the attitude towards assaults and our safety to change, and also more training for the staff then more importantly, more staff to help observe and provide honest observation for these patients,” said Levardo.

“You will never know when these incidents will happen and sometimes you need people to watch the patients for their own safety and ours as well. Nothing can replace more boots on the ground.”