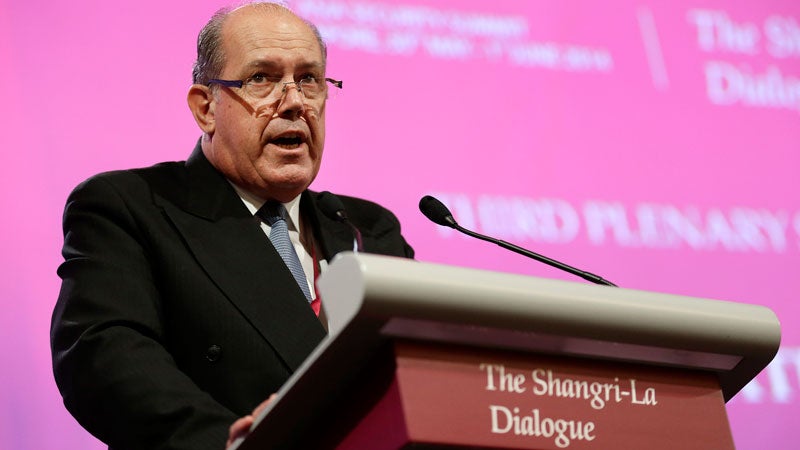 Australia’s Defense Minister David Johnston gives his speech about “Managing Strategic Tensions” on Saturday, May 31, 2014, in Singapore during the Asia Security Summit in Singapore, known as the Shangri-La Dialogue. Johnston has backed comments by his American counterpart Chuck Hagel accusing China of infringing international law by behaving aggressively toward its rivals for territory in the South China Sea. AP PHOTO/WONG MAYE-E

SYDNEY—Australia has backed the United States and Japan in accusing China of “destabilizing” actions in the South China Sea, becoming the latest world power to elbow Beijing about respecting the rule of law in resolving territorial disputes.

Australian Defense Minister David Johnston has backed comments by his American counterpart Chuck Hagel accusing China of infringing international law by behaving aggressively toward its rivals for territory in the South China Sea.

Speaking at the 13th Asia Security Summit in Singapore on Saturday, Hagel accused China of a number of alleged infractions, including against the Philippines and Vietnam, the two most vocal critics of Beijing’s territorial claims.

In opening the forum, Japanese Prime Minister Shinzo Abe urged countries to respect the rule of law, in apparent reference to perceived Chinese aggression in the South and East China Seas.

Johnston told the Sydney Morning Herald, in an interview from Singapore published on Monday, that he supported the US and Japanese views.

“The US, Australia and Japan are very concerned that unilateral action is destabilizing the region of the South China Sea particularly, and the East China Sea,” Johnston said.

Asked whether he supported Hagel’s comments, the Australian minister said: “I do to the extent that it is destabilization… in a previously very successful region that has been able to deliver enormous amounts of prosperity to countries in the Asia-Pacific. This instability is unwarranted and quite damaging to future economic prospects. So I do share Secretary Hagel’s concerns.”

Johnston said Australia did not take sides in territorial disputes between China and other countries, but said Canberra would attempt to persuade the Asian superpower that there was “another path.”

His office confirmed to Agence France-Presse that the remarks were correct.

China has denounced Hagel’s “provocative” comments along with those of Abe.

Speaking at the forum on Sunday, Lt. Gen. Wang Guanzhong, deputy chief of the general staff of the People’s Liberation Army, said Hagel’s and Abe’s comments were “unacceptable.”

“The Chinese delegation… has this feeling that the speeches of Mr. Abe and Mr. Hagel are a provocative action against China,” said Wang, dressed in full military regalia.

He cast aside his prepared speech and said he needed to respond to the remarks, accusing Abe and Hagel of “coordinating” with each other to attack China at the security conference.

“This is simply unimaginable,” said Wang, the highest-ranking military official in the Chinese delegation, adding that the speeches were “unacceptable and not in the spirit of this Shangril-La Dialogue.”

“The speeches made by Mr. Abe and Mr. Hagel gave me the impression that they coordinated with each other, they supported each other, they encouraged each other and they took the advantage of speaking first… and staged provocative actions and challenges against China,” Wang said.

Japan on Monday hit back at China’s denouncement of Abe’s speech, firing the latest salvo in an ongoing tit-for-tat row.

Chief Cabinet Secretary Yoshide Suga told reporters in Tokyo: “We believe the Chinese senior official made claims based on a mistake of facts and defamed our country.”

Suga said the Japanese delegation in Singapore immediately made a “strong protest” against the remarks to the Chinese side.

US commitments to allies

Stressing US commitments to allies and friends in Asia, Hagel had called for a peaceful resolution of maritime disputes and issued a blunt message to Beijing.

Hagel said that while the United States did not take sides on rival claims, “we firmly oppose any nation’s use of intimidation, coercion or the threat of force to assert these claims.”

“The United States will not look the other way when fundamental principles of the international order are being challenged,” he warned.

Abe pledged that his country would play a larger role in promoting peace in Asia, as his administration moves to reshape the Japanese military’s purely defensive stance.

Laying out a vision of Tokyo as a counterweight to the growing might of China but without naming any country, Abe offered Japan’s help to regional allies “to ensure security of the seas and skies.”

He said Japan and the United States stood ready to bolster security cooperation with the Association of Southeast Asian Nations (Asean) to promote peace.

“Japan intends to play an even greater and more proactive role than it has until now in making peace in Asia and the world something more certain,” Abe said.

China is locked in heated disputes with Asean members Brunei, Malaysia, the Philippines and Vietnam, as well as Taiwan over territory in the 3.5-million-square-kilometer South China Sea, 90 percent of which Beijing claims is part of its territory.

Beijing and Tokyo also contest a group of uninhabited islands in the East China Sea.

In November last year, China declared an air defense zone over those islands, known to the Japanese as the Senkakus and to the Chinese as the Diaoyus, demanding airlines to submit flight plans to Beijing before flying through the area.

Japan, the United States, the Philippines, Vietnam and Australia rejected the air defense zone, with Washington sending fighter jets through the zone to demonstrate its objection.

Without military muscle, the Philippines is trying to resolve its territorial dispute with China through the rule of law by bringing the dispute to the United Nations International Tribunal for the Law of the Sea for arbitration. Manila has asked the tribunal to nullify Beijing’s territorial claims in the West Philippine Sea.

China has refused to take part in the proceedings, which under the rules may go on even without Beijing’s participation.

Last week, Vietnam accused China of sinking one of its fishing vessels in the confrontation over the oil rig in the East Sea.

Dozens of Vietnamese and Chinese ships are locked in a face-off sparked by Beijing’s towing of the oil rig to the area on May 1.

China has brushed aside any objections to its actions, insisting that it has “undisputable sovereignty” over the South China Sea.

Japan hits back at China after Abe remarks spark row