‘One Kapamilya Go’ in Toronto billed as TFC’s biggest 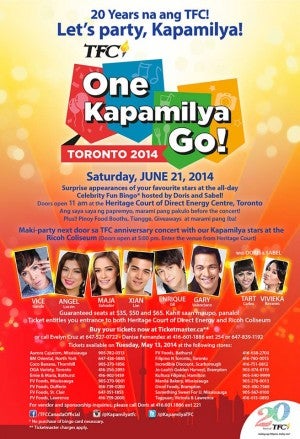 REDWOOD CITY, California – As part of its yearlong 20th anniversary celebration and summer tradition for overseas Filipinos, ABS-CBN’s The Filipino Channel (TFC) is holding its biggest “One Kapamilya Go” in Toronto, Canada, on Saturday, June 21.

One Kapamilya Go in Canada started in 2010 with the Sessionistas in Toronto and Calgary.

In 2012, TFC in Canada started its Summer Caravan of Events in various provinces and cities. In 2013, One Kapamilya Go brought the Toronto leg of the TFC romantic comedy, “Be Careful With My Heart World Tour,” with its top stars.

“This one is going to be one big TFC 20th anniversary party,” said Ricky Resurreccion, ABS-CBN North America head of Ad Sales, Events & Trade Marketing. “With fun activities like Celebrity Bingo, games, the Pinoy tiangge (Filipino flea market bazaar), Filipino food booths and more, plus a concert extravaganza with your favorite TFC stars, One Kapamilya Go in Toronto promises to transform the venue into the happiest place for Pinoys in Canada and Northeast U.S. on June 21.”

“Reaching our 20th year is special for TFC and we intend to make all attendees of our anniversary events feel special as well,” said Olivia De Jesus, ABS-CBN North America managing director.

“TFC’s anniversary really celebrates the overseas Filipino wherever he or she may be. Our milestone is their milestone. Hence, we will make sure they experience true kapamilya spirit by enjoying and having a good time at our events where our vibrant Filipino culture and world-class talent are showcased,” De Jesus added.

Tickets with guaranteed seats are at $65, $50 and $35. These can be purchased at Ticketmaster.ca (charges apply) or at select partner outlets. For more information, visit TFCCanadaOfficial on Facebook.