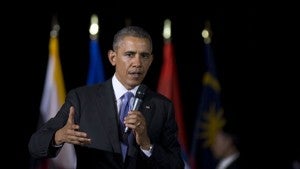 WASHINGTON — President Barack Obama has postponed a review of US deportation policy for undocumented workers, hoping to give legislative reform a better chance, a White House official said Tuesday.

Obama called on Secretary of Homeland Security Jeh Johnson to “hold on the release” of the results and recommendations of a review of procedures for deporting undocumented workers, the official said.

In doing so, the White House hopes to keep Republican push-back in Congress at bay, postponing a review that could drive those on the opposite side of the isle from legislative compromise.

Earlier this month Obama told police chiefs and top law enforcement officers that bitter party politics ahead of November’s polls would threaten hopes of moving a reform bill, currently stalled in the US House of Representatives, which is controlled by Republicans.

Obama, who based his 2012 re-election campaign in part on immigration reform, has insisted on a legislative solution.

Yet he ordered the review two months ago to determine whether deportation policy could be conducted more humanely, as he faces criticisms for what activists call mass expulsion.

The review will continue to be refined, while giving the House of Representatives “space to fix the broken immigration system, and to deny the Republicans any excuse for further inaction,” the official said in a statement.

Johnson has not indicated what type of procedures are under review or if the rate of deportation would be reduced.