No Americans yet in Oyster Bay, says Navy spokesman 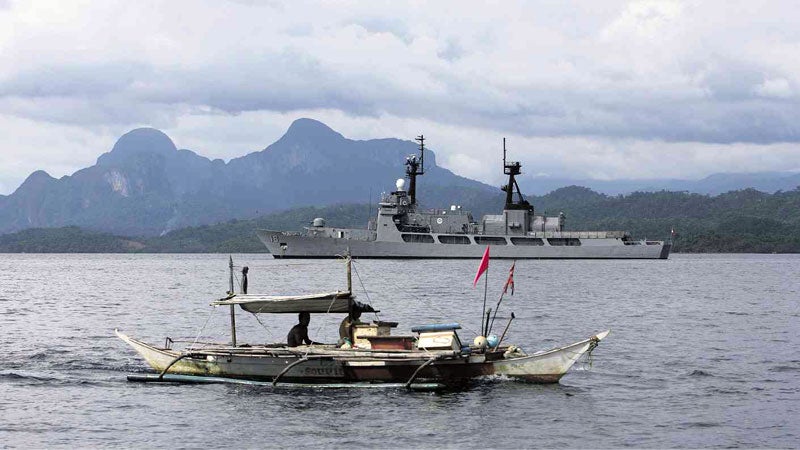 WORLD IS THEIR OYSTER Or soon it will be, as Oyster Bay and Ulugan Bay in Palawan province are being developed as a “mini-Subic” where the country’s two former US Coast Guard cutters will be based. Above, an outrigger carrying fishermen sails past a Philippine Navy vessel, one of many scattered on the bay fronting the West Philippine Sea. Oyster Bay is only 160 kilometers from the disputed Spratly Islands where China has been reclaiming Mabini Reef (Johnson South Reef) and building what appears to be an airstrip. MARIANNE BERMUDEZ

OYSTER BAY, Palawan—There are no Americans here on Oyster Bay—only a handful of Navy officers and men, with their ships that are docked at this base called Naval Station Carlito Cunanan (NSCC).

In fact, the Naval Forces West (Navforwest) denied talks that the US military is helping the Philippine Navy improve the physical structure of the Oyster Bay Navy Detachment or that it will be turned into a US naval station.

“The development plan for Oyster Bay is being done by the Philippine Navy,” said Lt. Senior Grade Jonjoe Saquiman, Navforwest spokesperson, when asked about the rumors.

The talk is that the Americans will be spearheading the Oyster Bay development after the Enhanced Defense Cooperation Agreement (Edca) is signed and the NSCC is possibly among the facilities of the Armed Forces of the Philippines that will be shared with US troops and their vessels.

AFP Chief of Staff Gen. Emmanuel Bautista has said Oyster Bay is among his “personal” preferences for AFP facilities to be included in the agreed military locations under the Edca.

But the list of AFP camps and facilities still has to be determined based on the joint Philippine-US military activities to be approved by the Mutual Defense Board-Security Engagement Board (MDB-SEB).

Oyster Bay is essential for the Philippine Navy in guarding the country’s territories in the West Philippine Sea, part of the South China Sea within the Philippines’ 370-kilometer exclusive economic zone.

“Oyster Bay is where our pier is, and other floating assets used for stationing and refueling station …. It makes our provisioning and rotation of personnel easier and faster,” Saquiman said.

Without Oyster Bay, the Navy would have to come from the pier in Puerto Princesa City, which would take more time and resources.

The defense establishment has earmarked P500 million for the development of Oyster Bay as well as Ulugan Bay, where the Navforwest headquarters is located.

It’s an ambitious project that would facilitate the strategic goals of the government that run in line with maritime security and awareness, and territorial defense.

Aside from the improvement of naval detachments, the plan also includes upgrading the Navy’s radar systems, which would conduct monitoring activities similar to the government’s Coast Watch System.

Funding problems, however, have reportedly delayed the full implementation of the development plan.

Two projects that are part of the development plan are going on, as the funds for them come from different sources.

The P43 million for the 11-km road from Bahile village to Oyster Bay is from the local Department of Public Works and Highways (DPWH).

The P7-million boathouse for the Navy vessels to be repaired at the NSCC is from the Navy.

The construction was under way when the Inquirer went to Oyster Bay on Sunday.

It was a quiet afternoon and the sailors were doing their daily exercises.

They were accommodating and friendly, and did not have qualms about touring their small group of visitors around their vessels. In fact, they were proud to show what the Navy has got.

The crew of one of the vessels warned their visitors to walk carefully on the main platform of the pier, as the huge wooden planks were rickety.

At the opposite end of the pier was a small nipa hut where a sailor was doing his laundry. Another was strumming his guitar.

It started to get dark and as much as they wanted their visitors to stay, the Navy men advised that it was time to go. The bugs would be coming out and their bite was itchy, they said.

The sailors often stay aboard their ships when darkness falls. There’s no electricity on the base, only a generator to power the whole facility.

“The Oyster Bay detachment is not a restricted facility. In fact, fishermen and civilians can go there. There are times, however, when we don’t allow visitors for security reasons,” Saquiman said.

PH to offer ‘underdeveloped naval base’ to US in Oyster Bay