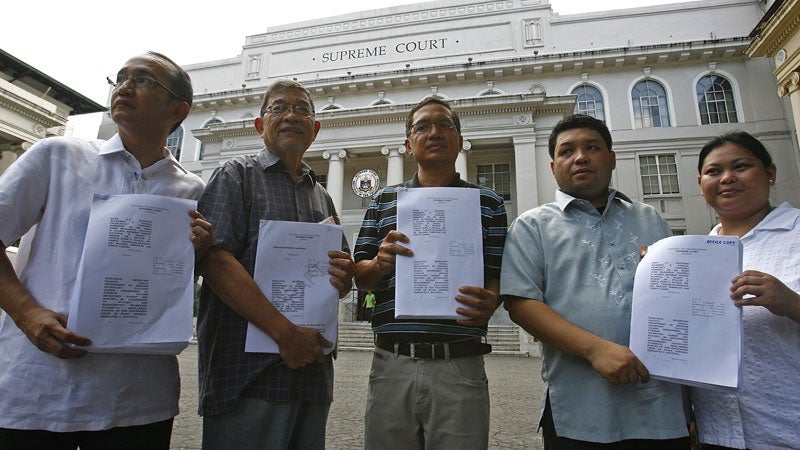 EDCA CHALLENGED (From left) Lawyers Edre Olalia and Steve Salonga and former Rep. Teddy Casino, all petitioners; and lawyers Romel Bagares and Ethel Avisado, both supporters of the petition, hold copies of the petition to declare as unconstitutional the Enhanced Defense Cooperation Agreement in front of the Supreme Court building in Manila. INQUIRER PHOTO/RAFFY LERMA

MANILA, Philippines—Two former senators who 24 years ago fought for the removal of US military bases from the Philippines on Monday challenged in the Supreme Court the legality of a new security agreement between the Philippines and the United States that would expand American military presence in the country.

Former Senators Wigberto Tañada and Rene Saguisag joined a group of petitioners that asked the Supreme Court to stop the implementation of the Enhanced Defense Cooperation Agreement (Edca) that was signed hours before the arrival of US President Barack Obama on April 28 for an overnight state visit.

The agreement, signed by Filipino and US officials after eight months of negotiations, allows more US troops to come to the Philippines and gives them access to selected Philippine military bases. It also allows the US military to preposition warplanes and ships in the Philippines.

Tañada, Saguisag and the 10 other petitioners filed a petition for certiorari and prohibition against the agreement and sought the issuance of a writ of prohibitory injunction or a temporary restraining order or both pending resolution of the pleading by the court.

They asked the court to declare the agreement unconstitutional for violating several provisions of the 1987 Constitution.

“This agreement will allow the US government to use Philippine military bases, essentially allowing them to build structures, store as well as preposition weapons, defense supplies and matériel, station troops, civilian personnel and defense contractors, transit and station vehicles, vessels and aircraft. This will effectively allow them to establish and operate de facto military bases anywhere on Philippine soil, minus the cost of paying for one,” the petitioners said.

Tañada, Saguisag and 10 other senators voted in 1991 against the extension of the US military’s lease on Subic Naval Base in Zambales province and on Clark Air Base in Pampanga province for another 10 years.

For their courageous stand and their defiance of the will of then President Corazon Aquino, the anti-US bases senators were called the “Magnificent 12.”

Ironically, Mrs. Aquino’s son, Benigno, is now the President of the Philippines and he insists that the Edca can stand scrutiny by the Supreme Court.

In their 65-page petition, the opponents of the Edca said Gazmin committed grave abuse of discretion amounting to lack or excess of jurisdiction when he entered into the agreement on behalf of the government.

Noting that government officials had claimed that the Edca was anchored on the 1951 Mutual Defense Treaty (MDT) between the Philippines and the United States, the petitioners said there was now a need to “squarely attack” the constitutionality of the MDT “because its provisions directly contradict the peace-oriented 1987 Charter.”

The Constitution, they said, renounces war as an instrument of national policy and that the MDT, which was firmed up during the Cold War era, contravenes the constitutional policy against war.

Thus, the petitioners said the Edca “must be struck down for being unconstitutional.”

But if the MDT is constitutional, they said, the government cannot say that the Edca is a further implementation of the MDT and the 1999 Visiting Forces Agreement (VFA).

“There are no provisions in the MDT that authorize and provide for any subsequent agreement in furtherance of its purpose …. The VFA also cannot have an application in the Edca since the VFA only covered the entry of American troops visiting the Philippines for the purpose of training exercises,” the petitioners said.

The Constitution, they said, is clear that “foreign military bases, troops, or facilities are not allowed unless there is a concurrence by the Senate.”

They also said that the MDT had been superseded by the 1987 Constitution.

The petitioners disagreed with the government that the Edca was an executive agreement, saying the agreement needed Senate concurrence as required by Section 25, Article XVIII of the 1987 Constitution because the Edca would involve stationing of troops in the country, “in a manner which was not provided for either in the MDT or in the VFA.”

This was why, they said, the respondents “unlawfully neglected” to transmit the Edca to the Senate.

“There is no express prohibition for the entry of nuclear weapons through the other activities allowed by the Edca, namely transit; refueling of aircraft; bunkering of vessels; and temporary maintenance of vehicles, vessels and aircraft, among others,” the petitioners said.

Saying that the agreement was an “affront to the national interest,” the petitioners pointed out that the Edca was lopsided in favor of the United States compared with the agreements Washington had with other allies.

“With the Edca, not only is the Philippines not receiving any remuneration for allowing US presence in the country, [but] it [also] has committed to making all the effort to facilitate US presence in the country, including providing security for the facilities, equipment, supplies and matériel to be stored. All these for the measly return of by then old building, facilities and infrastructure and the possible sale or transfer of equipment determined to be excess,” the petitioners said.

A comparison of the Status of Forces Agreement between the United States and other nations like Iraq, Japan and South Korea showed that there is a possibility of interim use of the host countries of the facilities constructed by the United States in the agreed locations, unlike in the Philippines “where facilities are for the use of the US until they are no longer needed,” they said.

The Philippines also stands to bear the cost of the taxes on the utilities of the United States, which the petitioners said was not present in the other agreements.

Target for US enemies

The petitioners also claimed that the government has made the country a “target of US enemies” because US military facilities located here can be considered effectively contributing to US military action.

They said agreed locations for the bases could be “put in harm’s way if the US enters into an international armed conflict even if the potential US conflict is not geographically in the Philippines.”

There was no immediate comment from Malacañang on Monday, but executive officials, including Gazmin, have said the Edca could withstand a challenge to its legality.

General Bautista said last week that the agreement was a deterrent to war, though he did not mention a potential aggressor.

That could be China, which is aggressively asserting its territorial claim in the West Philippine Sea, including seizing Panatag Shoal (Scarborough Shoal) off Zambales province and building what could be an airstrip on Mabini Reef (Johnson South Reef) on the Philippine side of the disputed Spratly Islands off Palawan province.

Although already signed, the Edca will not be implemented until the activities proposed under the agreement are approved by the Mutual Defense Board-Security Engagement Board (MDB-SEB).

Top Philippine and US military and defense officials serve on the MDB-SEB, which will meet in September or October to tackle the agreement. With a report from Tetch Torres-Tupas, INQUIRER.net