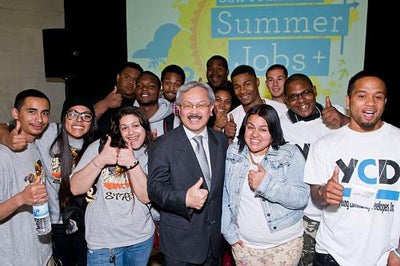 Mayor Edwin M. Lee and the United Way of the Bay Area along with City Departments and several private sector employers are leading the effort to surpass last year’s job placement achievement.

Now in its third year, Lee’s Summer Jobs+ initiative connects San Francisco employers with low-income and disconnected San Francisco youth so that they get the practical job experience and skills they will need to succeed in today’s economy.

This year, the program expansion includes placing individuals in employment and training opportunities beyond the summer so that they continue to have the discipline, training, and work exposure; while experiencing the connection between their education and their future careers.

Lee once again called on employers large and small across San Francisco to invest in young people supporting by creating 7,000 “meaningful employment opportunities” for low-income and disadvantaged youths this summer.

Last year, almost 100 private sector employers including companies like Starbucks, Old Navy and Zynga participated. More than 60 nonprofits such as Glide Memorial, the Boys and Girls Club and the Third Street Youth Center and Clinic joined over 55 City agencies to provide youths with work experiences in office work, the arts, computer science, retail, banking, engineering, landscaping and in dozens of other fields.

United Way of the Bay Area is leading San Francisco’s effort in support of Summer Jobs+ Program along with Department of Children Youth and their Families (DCYF), Office of Economic and Workforce Development (OEWD) and the San Francisco Unified School District (SFUSD).

“We are so fortunate to be in San Francisco – a city where our mayor cares deeply about our youth, and a city in which our companies and community organizations are committed to our young people’s future success,” said United Way Bay Area Chief Executive Officer Anne Wilson.

Many youths that have participated in past years were from low-income families. Many youth that have been placed has also been disconnected and at-risk youths who overcame significant barriers including those from the foster care system, the justice system, and those who do not have a right to work.

The Transitional Aged Youth Initiative (TAYSF) estimates that almost 9,000 young adults are neither working nor enrolled in school. They estimate an additional 5,000 youths ages 14-24 are undocumented with little or no legal options for employment.

This year, JP Morgan Chase is contributing $200,000 to Summer Jobs+, doubling their commitment from last year. JP Morgan Chase Market Manager for Consumer and Community Banking Don Bausley said,  “We are thrilled to work with Mayor Lee, the city of San Francisco and United Way of the Bay Area to help better prepare our youth for the future.”

In addition to JP Morgan Chase’s contribution, the City has raised additional funds through sponsorships from PG&E, a founding partner, with $275,000; Citi Foundation and Cities for Financial Empowerment with over $470,000; Bank of America and Wells Fargo who are contributing $50,000 each to the program, and through other funders. Financial contributions are used to subsidize internships and additional youth summer enrichment programs. Employers that have already committed to hiring youth this summer and throughout the year include: the California Academy of Sciences, Starbucks, Jamba Juice, Kaiser Permanente, Advent Software, Enterprise, Target and UCSF.

“The amazing customer connections and genuine relationships that I make each day at Starbucks has inspired me to pursue a future in the Hospitality and Tourism industry,” said Elizabeth Kim, a 2012 Summer Jobs+ participant and third year student at San Francisco State University. “From a Barista to now Shift Supervisor, I am instilled with the training and confidence to lead my current team and any team in the future.”

Employers or youth interested in participating or learning more about San Francisco Summer Jobs+, go to sfsummerjobs.org or matchbridge.org or call 3-1-1 or 2-1-1.