PH should not rely too much on US—Orlando Mercado 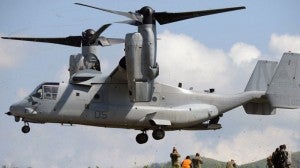 A US Air Force V-22 Osprey prepares to land near the command post prior to live fire drills on the last day of the annual US-Philippine joint military exercise at the former US traget range in Crow Valley, Capas town, Tarlac province, on Thursday, May 15, 2014. AFP PHOTO

MANILA, Philippines—Former senator and Defense secretary Orlando Mercado said that the Philippines should not rely heavily on the United States against its territorial conflict with China.

Mercado said that having the US as an ally is only a “tactical move” and that fighting for Philippine sovereignty still falls on the shoulders of the Filipinos.

“I think it is wise that we have renewed our alliance,” Mercado said Thursday at the Development Academy of the Philippines. “But we must remember that this is only a tactical move; we must not abdicate our role and function of defending our sovereignty.”

“We cannot abdicate that function and give it to another country.”

Mercado said that Filipinos would always rely on the Americans thinking that they would always be on the rescue.

“In the past, I was hoping that the removal of the bases has made us thinking more strategically and think of our defense,” Mercado said. “But we missed out on it.”

Mercadodoubted that the continuing dispute between China and the Philippines would lead to armed conflict.

He said that all disputes should be fought atop the table but every nation should still have a credible defense to back up its diplomacy.

“We’ve always been diplomatic, but your diplomacy should always be backed up by a credible force.”