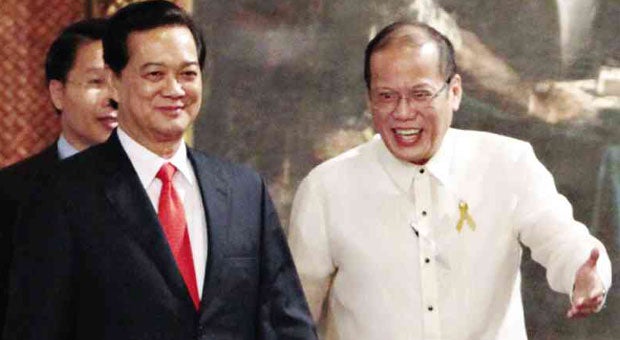 COMMON PROBLEM President Aquino welcomes Vietnamese PM Nguyen Tan Dung to the Palace on Wednesday where the two leaders discussed their countries’ maritime security in the South China Sea. Nguyen came out firing but Aquino did not even mention China. GRIG C. MONTEGRANDE

MANILA, Philippines—Visiting Prime Minister Nguyen Tan Dung of Vietnam on Wednesday came out firing against China, saying both his country and the Philippines were “determined to oppose” Beijing’s provocative and aggressive actions in the South China Sea.

President Aquino did not speak as strongly during the joint press conference with Dung, saying only that “continued cooperation between the Philippines and Vietnam will enable us to better protect our maritime resources.”

Dung sought to rally the international community behind Vietnam and the Philippines, which are facing separate territorial disputes with the regional powerhouse.

“The two sides are determined to oppose China’s violations and call on countries and the international community to continue strongly condemning China,” he said.

Dung also called on other countries to demand that China “end its violations” in the disputed territory and “fully and strictly observe international law.”

Dung said both he and Aquino “shared deep concern over the current extremely dangerous situation caused by China’s many actions that violate international law, the 1982 Unclos and seriously infringe on the waters of coastal countries.”

The Vietnamese leader cited Beijing’s “illegal placement” of an oil rig and the “deployment of coast guard vessels to protect the rig deep into Vietnam’s continental shelf and exclusive economic zone.”

But the Prime Minister was just getting warmed up. He reiterated his call and assailed China once again in a speech before offering a toast at the dinner hosted for him at the President’s Hall of the Palace.

Aquino and Dung agreed to establish a working commission that would craft a “road map toward a strategic partnership” between their countries.

China’s installation of an oil rig deep into Vietnam’s continental shelf has sparked violent protests in Dung’s country. At least four Chinese nationals were killed in the ensuing riots. Beijing has sent ships to evacuate thousands of its citizens from Vietnam.

While Dung was fiery in his statement, Aquino made no specific mention of China in his media address, which followed an extended bilateral meeting with the Vietnamese leader.

Aquino said the meeting tackled how Vietnam and the Philippines could “enhance confidence building, our defense capabilities, and interoperability in addressing security challenges.”

“I believe that continued cooperation with Vietnam, as well as with other members of Asean [Association of Southeast Asian Nations], in defense and security will only contribute to promoting regional stability,” he said.

“It is not an overstatement when I say that I look forward to increased collaboration between our respective defense agencies. Might I also add that both our nations are looking forward to jointly determine the prerequisites in forging a road map towards a strategic partnership.”

Prior to the bilateral meeting, Malacañang rejected insinuations that the Philippines and Vietnam were ganging up on China by meeting on the sidelines of the World Economic Forum on East Asia here, and tackling their respective territorial disputes with Beijing.

“No. That’s not the proper context to it,” Presidential Spokesman Edwin Lacierda told reporters, noting that Dung’s working visit to Manila was primarily to attend the economic forum being hosted by Manila.