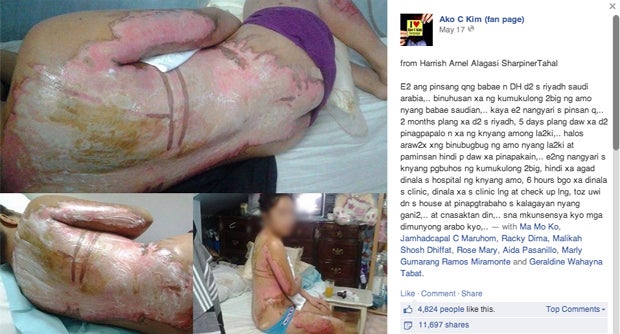 Photos of 22-year old Fahima “Candies” Alagasi, who suffered second degree burns after her employer poured boiling water on her, went viral online after her cousin posted them on Facebook.

MANILA, Philippines—Because of poverty, 22-year-old Pahima “Candies” Alagasi Palacasi was  compelled to work as a domestic helper in the Middle East. Instead of finding greener pastures abroad, she suffered from abuse at the hands of her employers.

The victim’s cousin, Arnel Tahal, said Palacasi, a native of Pilit, North Cotabato, was constantly being maltreated by her employers in Riyadh, Saudi Arabia, since she came to live with them two months ago.

Her ordeal became worse on May 4, 2014, when her irate female employer poured boiling water on her after she had dropped the cap of the water heater while making coffee.

She sustained second-degree burns and was brought to a small clinic where a Filipina nurse treated her. It was the Filipina nurse who contacted Palacasi’s sister.

Despite being injured, Palacasi was still forced by her employers to work. They continued to abuse her, Tahal said.

Fortunately, during their next visit to the clinic, Palacasi’s other cousin arrived. The nurse and the clinic doctor helped the two escape.

It was Tahal who posted the heart-wrenching photos of Palacasi’s burnt back and legs. He recently deleted the post, concerned that their family would be harassed by the employers and the recruitment agency.

However, a copy of the photos was posted on another Facebook page. The post has been shared 11,678 times. It received more than 4,500 comments from Filipinos expressing support for the overseas Filipino worker (OFW) and her family.

Tahal told INQUIRER.net that they are thankful to everyone who shared the post and informed the media and authorities about it.

(Posting the picture of my cousin helped a lot, because now, the embassy will be able to focus on her case.)

(I hope this case won’t be all for naught and help will come from the Aquino administration.)

He said many OFWs are helping them and giving Palacasi emotional and material support.

A separate report from the Department of Labor (DOLE) said the victim was brought to the Shumaisy Hospital by Philippine embassy personnel. She was later taken to Bahay Kalinga and underwent counseling.

On Tuesday, DOLE announced that the Philippine Overseas Labor Office (POLO) in Riyadh already suspended the agency that recruited Palacasi.

“Labor Attache to Riyadh Rustico Dela Fuente said the POLO has summoned the Saudi recruitment agency (SRA) that recruited Palacasi and promptly placed it on documentary suspension, which prevents it from recruiting any more workers from the Philippines,” the statement said.

Ambassador to the Kingdom of Saudi Arabia Ezzedin Tago also instructed the POLO and the Assistance to Nationals Section (ANS) to jointly investigate the OFWs case.

“OFW Palacasi is determined to file a case against the employer. The Embassy and the POLO will assist he,” Dela Fuente said in his report.

Meanwhile, Baldoz said that even if Palasi was not a member of the Overseas Workers Welfare Administration (OWWA), she can avail of its livelihood programs in case she returns to the Philippines.

Palacasi’s cousin, who is also working in Riyadh, said they hope that there are more job opportunities in the Philippines so they need not sacrifice abroad.

(The reason why we are working hard abroad is because it’s difficult to find a job in the Philippines. But this is what we suffer while working here. There are those who are raped, killed and subjected to the same condition as my cousin.)

In a separate interview, John Leonard Monterona of Migrante-Middle East said they are set to meet with Palacasi and her relatives. He said they will campaign and launch a justice movement for her and other maltreated women OFWs.

“We reiterate our call to work for the passage of local laws and social legislation that would truly guarantee migrants rights and welfare especially in mid-east countries,” he said.

Monterona also urged the government to stop its “labor export program” and instead invest on creating local jobs that will give Filipinos sufficient income and benefits.

Justice for maltreated OFW in Qatar