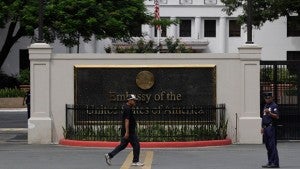 BAGUIO CITY, Philippines — The United States government is helping restore and conserve two historical churches in the Visayas that were damaged by an earthquake and by Super Typhoon “Yolanda” last year.

Kristin Kneedler, cultural affairs officer of the US Embassy, said the Ambassador’s Fund for Cultural Preservation Program (AFCP) of the US Embassy will support the restoration of the San Guillermo de Aquitania Parish church in Dalaguete town, Cebu province, and the Immaculate Conception Church in Guiuan town, Eastern Samar province.

Kneedler, who spoke about heritage conservation projects in the Philippines during the 5th Tam-Awan International Arts Festival here last week, said the churches were the AFCP’s two special projects this year.

“These are under consideration. These are the projects that we are committed to fund,” she said.

Kneedler said while they have yet to receive a final budget cost for the churches’ restoration, everything was already “in the works” and the talks on the projects would be finalized by July.

She said helping restore these churches would help communities struck by the earthquake and typhoon recover from the devastation.

The AFCP, in its proposal, said the US Constitution allows the American government to include religious objects and sites within an aid program in its cultural preservation program grants.

“For example, an item with a religious connection (including a place of worship) may be the subject of a cultural preservation grant if the item derives its primary significance and is nominated solely on the basis of architectural, artistic, historical or other cultural (not religious) criteria,” it said.

The grant amount “for these churches is much higher than some of our other projects. You saw the pictures of these beautiful churches that have been devastated in many ways and these projects [may cost] several hundreds of thousands of dollars,” Kneedler said.

“The US government has a great respect for culture and we want to help other countries preserve [their] culture. It’s an important part of who we are and where we came from and where we are going. I think it is important to all of us to look at these sites and try to preserve them for future generations,” she said.

Kneedler said the AFCP has spent more than $26 million for 400 preservation projects worldwide and more than $300,000 in the Philippines.

The Ateneo de Manila University was the first recipient of the AFCP grant. In 2001, the AFCP funded the AdMU’s Philippine-American Heritage Project on Historic Photograph Collection of the American Historical Collection at the Rizal Library. The fund was used to digitize 15,000 photographs from the American colonial period.