FORT MAGSAYSAY, Philippines – They could have been in Zamboanga City all over again except that this time, they’re not.

Although 1st  Lieutenant Dominador Tagorda of the Philippine Army said Saturday’s Balikatan exercises employed the same “tactics and techniques” that were used in Zamboanga City to quell the rebellion by the Moro National Liberation Front in September 2013,  the difference this time is being able to do them by applying US “principles” of combat. 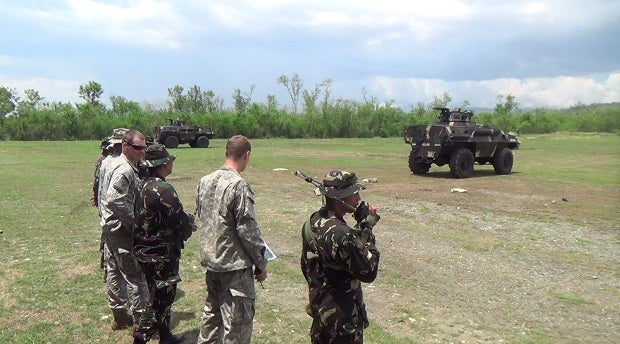 “We have practiced all week in conducting basic tasks,” Captain John Healy, commander of the 3rd squadron of the 4th cavalry troop, said. “This can be considered as the culmination, after all the classes and hands-on training.”

Healy said that the Philippine forces would not exactly mimic the tactics and techniques that the American troops did but learn the principles behind them.

“They would not exactly mimic our tactics because we use different equipment and machine, rather we would apply our principles during the exercises,” Healy said.

During the drills, the four vehicles which had three-man teams inside – a driver, gunner, and commander – took out targets from 600 meters away.

Alternately taking shots, the gunners used their .50-caliber machine guns atop the vehicles to take out the “enemies”.

Tagorda said the drills were used to simulate jungle and urban warfare, as the vehicles were versatile enough to engage in any accessible terrain.

It was the same tactics and techniques during the Zamboanga siege, he said.

“We practice movements and commands…to maximize the capability of our armored vehicles,” Tagorda said.

Tagorda said, however, that it was not only they who learned from the Americans but that it was two-way.

“We learn from our American counterparts and at the same time they too learn from us as we observe each other during the training,” Tagorda said.

During the training, Healy echoed what his colleagues had to say about Filipino soldiers who participated in this year’s Balikatan. “In a scale of one to 10, they’d be an eight.”