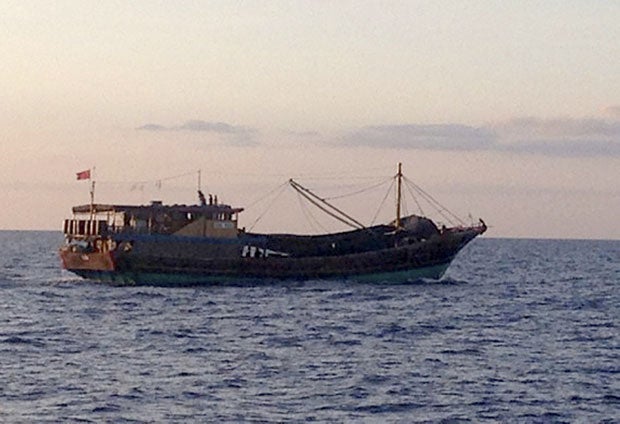 This photo released by the Philippine National Police Maritime Group shows a foreign vessel flying a Chinese flag cruising in the waters off South China Sea when spotted by police maritime patrol Tuesday, May 6, 2014. The Philippine national police chief said Thursday, May 8 the government will investigate 11 Chinese fishermen to see if they illegally entered the country or committed other crimes, ignoring China’s demand for them to be immediately released. China pressed the Philippines to release the fishermen and their boat, warning Manila Thursday not to take any more “provocative actions so as to avoid further damage to the bilateral relations.” AP

MANILA, Philippines—The Chinese vessel caught poaching in Philippine waters is set to undergo an inventory after docking in Palawan on Saturday, Radyo Inquirer 990AM reported.

The report said the Bureau of Fisheries and Aquatic Resources, Bureau of Customs and the Palawan Council for Sustainable Development would conduct the inventory in Puerto Prinsesa. 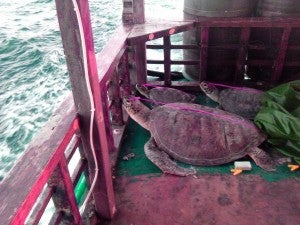 The live sea turtles found in the Chinese vessel were tied through their eyes. Photo released from the PNP Maritime Police in their Facebook account.

The 11-member crew was caught shipping 400 sea turtles aboard the boat.

The arrest angered China, which demanded the release of the boat and its crew as it claimed the shoal was part of its territory.

The police also arrested five Filipino fishermen in the area after 70 sea turtles were found on their boat.

The Department of Foreign Affairs (DFA) said the arrest was an exercise of Philippines’ sovereignty over its exclusive economic zone (EEZ) in the West Philippine Sea (South China Sea). Officials from the police said the country was just doing its job when it arrested the Chinese fishers.

Arrest of Chinese fishers not motivated by sea tension—Roxas