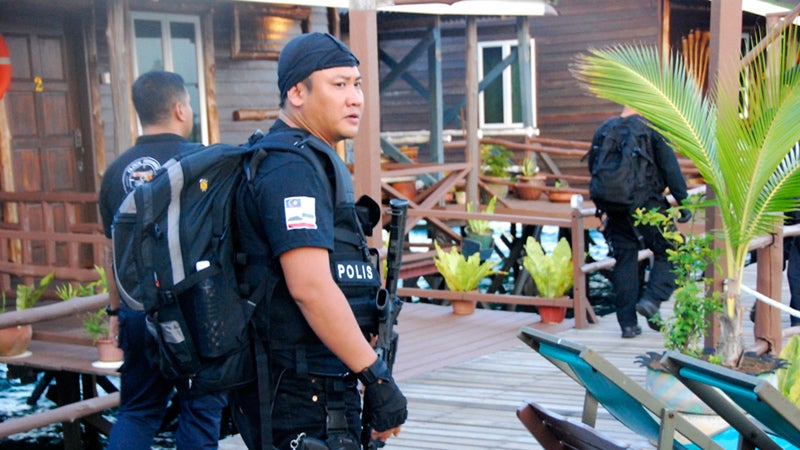 KUALA LUMPUR — A Chinese national has been seized in Malaysia’s Borneo island by Filipino gunmen, a security official said Tuesday in the wake of tension between Kuala Lumpur and Beijing over missing Malaysia Airlines flight MH370.

Mohammad Mentek, director-general of security in the east of Malaysia’s Sabah state, identified the victim as 34-year-old Yang Zai Lin, who worked as a manager at a fish farm.

Malaysian security forces engaged in a shootout with the armed kidnappers, but the gunmen managed to escape in a boat with Yang, he said.

“We exchanged gunfire. But the criminals from southern Philippines managed to escape into international waters,” he said in a statement.

Mohammad said the incident happened early Tuesday near Lahad Datu, on the eastern side of Sabah facing the southern Philippines.

Yang, who is from Guangzhao, has been working in Sabah for the past three years, he said.

His abduction is the second recent kidnapping of a Chinese national in the area. Last month, Chinese tourist Gao Huayun, 29, and Filipina resort worker Marcy Dayawan, 40, were seized from a resort in Sabah.

The string of violence highlights the security challenges Malaysia faces in the area, after last year’s bloody armed assault by Islamic guerillas from the southern Philippines.

Yong Teck Lee, former chief minister of Sabah, blasted security forces for their failure to secure the area, and warned that it will hurt Malaysia-China relations.

“It is a huge embarrassment to our security machinery as it happened very deep inside Malaysia’s territorial waters. The damage (in Malaysia-China ties) will be compounded further,” he said.

Relations between Malaysia and China are fraught over the search for MH370, which went missing on March 8 with 239 people aboard, mostly Chinese.

The aircraft has yet to be found, and Chinese families have accused Malaysia of mishandling the tragedy.

The eastern part of Sabah — whose pristine dive sites are a top tourist attraction — has seen several kidnappings despite increased security.

The Abu Sayyaf militant group in the southern Philippines have only a few hundred gunmen, but have been blamed for the worst terror attacks in the country’s history, including bombings and kidnappings that have often targeted foreigners or Christians.

The group was set up in the 1990s, reportedly with seed money from Al-Qaeda mastermind Osama bin Laden.

The husband was killed during the abduction. His wife was freed after being held for 36 days on the main Sulu island of Jolo. A ransom is believed to have been paid.