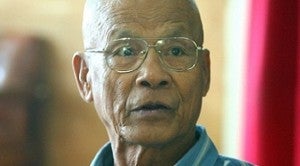 MANILA, Philippines—House Committee on Defense Chair Rodolfo Biazon said that the Enhanced Defense Cooperation Agreement (EDCA) between the Philippines and the United States need no ratification from the senate, saying that the agreement is not of political nature and would not hamper any existing laws and policies.

“At this point, I do not think there is a need to ratify,” Biazon said after the opening ceremonies of Balikatan 2014 at Tejeros Hall in Camp Aguinaldo Monday.

He added that the concern of the Senate is the agreement’s constitutionality and its power to ratify EDCA while the House of Representative’s concern is the need for the agreement.

“To me as chairman of the Defense Committee in the House of Representatives, I am going to look at it on the question of need,” the former senator and now Muntinlupa Congressman said.

Biazon looked at the recent actions of China in blocking the supply route and driving away Filipino fishermen from Philippine waters and their constant presence in the Ayungin Shoal as the factors in the signing of the agreement.

He pointed out the three factors of any international agreement that would merit any approval from the senate; an agreement which is political in nature, a permanent agreement, or if an agreement would require changes in existing policies.

“Let us take a look at the EDCA. Is this political in nature? This is security,” Biazon said. “It’s all about security of this country, prevention of aggression.”

He added that terms in the EDCA would only last for 10 years, and it would not require any changes in existing policies.

EDCA would only bolster the three existing treaties between the Philippines and the United States, the Mutual Defense Treaty, Military Logistics Support Agreement, and the Visiting Forces Agreement.

“All the agreements are there, this EDCA is only designed to enhance the effectiveness of these three existing treaties.”

Biazon added that despite the criticisms that EDCA receives from anti-US groups, he would “definitely” support its implementation.

Also, the former Armed Forces Chief of Staff said that with the EDCA, the Chinese would think twice before doing any actions in the disputed territories.