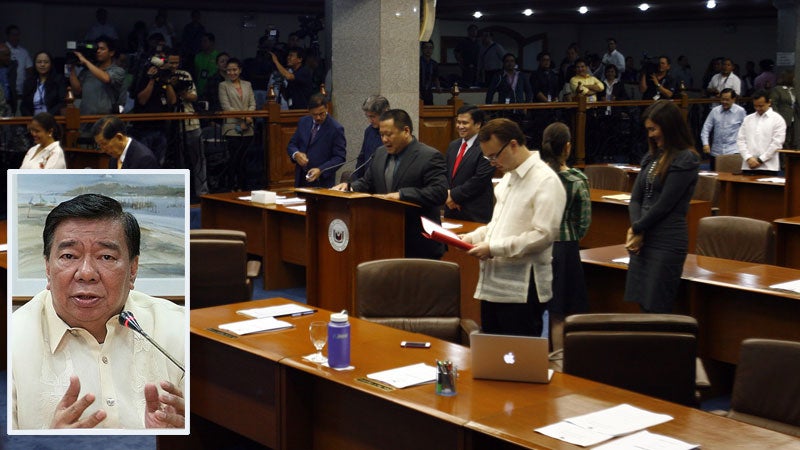 The senators are expected to tackle the agreement in a caucus when sessions resume Monday. Senate President Franklin Drilon, a member of President Aquino’s Liberal Party, said the Senate should have been “consulted” prior to the signing of the agreement on April 28, three hours before US President Barack Obama arrived in Manila for an overnight visit. INQUIRER FILE PHOTOS

MANILA, Philippines—The Senate cannot compel Malacañang to submit the Enhanced Defense Cooperation Agreement (Edca) for ratification, but the Palace should have been “prudent” enough to consult the senators before sealing the deal with the United States, Senate President Franklin Drilon said on Sunday.

Drilon maintained that the agreement enjoyed a “presumption of constitutionality,” citing also the presumption of “regularity in the performance of functions” by the members of the Philippine panel that negotiated with the United States.

“We cannot force them to submit [the agreement for ratification], that’s why it’s better to bring the matter to the Supreme Court, which could order that it be submitted to the Senate,” Drilon said in Filipino in an interview on dzBB radio.

Drilon, a member of President Aquino’s Liberal Party, said the Senate should have been “consulted” prior to the signing of the agreement on April 28, three hours before US President Barack Obama arrived in Manila for an overnight visit.

“Of course, prudence would have dictated that there should have been consultation, but the executive branch thought that it had already briefed and consulted with the appropriate Senate committees,” Drilon said.

The senators are expected to tackle the agreement in a caucus when sessions resume Monday.

Drilon said he did receive a “regular update” on the status of negotiations prior to the signing of the new defense agreement.

He said the “burden” was with the executive branch to explain why it does not consider the agreement a new treaty.

“How is it different from the bases agreement, from the situations before in Subic and Clark?” he asked, referring to the US military bases that were shut down in 1991.

“[How is it different that Malacañang says it] is not a treaty that needs ratification and concurrence of the Senate, which has treaty-making authority? How does the executive explain this is not a treaty? We will listen to all this in the coming days,” he added.

The 10-year agreement is a framework deal designed to further military cooperation between the Philippines and the United States.

It gives US forces temporary access to selected Philippine military camps and allows them to preposition fighter jets and ships.

The agreement does not specify how many additional US troops will be deployed “on temporary and rotational basis,” but Filipino and American officials will determine the number depending on the scale of joint military activities to be held in Philippine camps.

Malacañang insists the agreement is a mere executive agreement so that it does not require ratification by the Senate.

Former Sen. Joker Arroyo said on Saturday that the agreement was the Aquino administration’s way to go around the constitutional provision banning foreign military bases on Philippine territory.

“This is even worse. You allow your bases to be used by the American forces,” Arroyo said.

Responding to Arroyo’s criticism, Communications Secretary Herminio Coloma said Sunday that the agreement has a “clear provision that the US will not establish a permanent military presence or base in the Philippines.”

Sen. Grace Poe, another administration ally, said on Sunday that the agreement has “many good points,” and that she also considers the deal an executive agreement, not a treaty. But she asked how it would apply in case the Philippines was attacked.

“My question is: Let’s say there’s an invasion, we are attacked, how fast will the Americans come to our assistance? Will they still go through a UN (United Nations) resolution?” she said on Nimfa Ravelo’s program on dzBB.

Poe was referring to Article 1 of the Mutual Defense Treaty (MDT), which was cited in the preamble of the new agreement. It states that both the United States and the Philippines “undertake, as set forth in the Charter of the United Nations, to settle any international disputes in which they may be involved by peaceful means in such a manner that international peace and security and justice are not endangered.”

The MDT also states that both parties would “refrain in their international relations from the threat or use of force in any manner inconsistent with the purposes of the United Nations.”

Poe was also concerned about how the new agreement would be applied if American troops committed a crime while in the Philippines.

“What would be the liability if one of them commits a crime? How do we protect our people, our women?” she asked.

Asked why the agreement was signed even without details of the “agreed locations” or bases to be accessed by US troops, Drilon said the implementation of the new agreement should be “watched closely.”

Under the agreement, US “access to and use of facilities and areas will be at the invitation of the Philippines and with full respect for the Philippine Constitution and Philippine laws.”

But the militant party-list group Bayan Muna sees the agreement as giving the United States unlimited access to Philippine bases and its forces unlimited privileges in the country because of many “vague and open-ended” provisions.

Bayan Muna Rep. Neri Colmenares said in a statement that the agreement’s declaration that it would only be for an initial 10-year term was unnecessary and deceptive.

“They could have stated one year or 100 years and it would not have mattered because the [agreement] will only end if it is ‘terminated by either party’ and not because its term has expired,” Colmenares said.—With a report from Gil C. Cabacungan

Read Next
Paul VI, first pope to visit Philippines, to be beatified soon
EDITORS' PICK
PH preps for China virus: Question of when, not if
Museums ‘put to sleep,’ churches closed amid volcano’s unrest
Beyond water service: Maynilad builds massive infrastructure projects to clean up Metro Manila waterways
Get exciting deals and discounts when you download the new McDonald’s App
Seventh judge assigned to handle De Lima case
SM continues to send relief assistance to remote towns in Batangas
MOST READ
Passengers from Wuhan, China to be flown out of Kalibo, Aklan – CAAP
Part of Aurora Boulevard in Cubao closed from Jan. 25 – Feb. 1
Lacson on Duterte’s threat to end VFA over Bato’s canceled visa: Where is the connection?
Seventh judge assigned to handle De Lima case
Don't miss out on the latest news and information.