US juggling ‘too many’ humanitarian crises worldwide 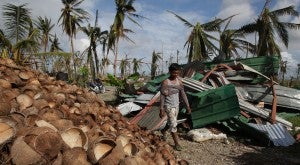 The United States is contending with too many global humanitarian crises at once, including the aftermath of the Philippines’ devastating typhoon (in photo), to comprehensively fund relief efforts, the State Department told Congress Thursday, urging other nations to step up. AP FILE PHOTO

WASHINGTON—The United States is contending with too many global humanitarian crises at once to comprehensively fund relief efforts, the State Department told Congress Thursday, urging other nations to step up.

The aid landscape this year looked particularly challenging given the emergencies in South Sudan and the Central African Republic (CAR), where brutal rebellions and ethno-religious violence have left thousands of people dead, displaced millions and pushed countless more to the brink of famine.

“Thanks to Congress, we have appropriations to do more this year, but as you know we are contending with too many humanitarian emergencies,” Assistant Secretary of State Anne Richard, who oversees population, refugees and migration issues, told a House hearing on the CAR.

Some 2,000 people have been killed and nearly a million displaced since ethnic and religious strife swept the Central African Republic in late 2013, according to the State Department.

It is coordinating some $67 million in humanitarian aid for CAR this year, and in mid-April the United Nations called for $274 million to address humanitarian needs in the region related to the crisis there.

But the donor community risks its aid being spread too thin on the ground.

“Unrest in CAR is happening at the same time as upheaval and violence in South Sudan and widespread conflict in Syria,” Richards told a House Foreign Affairs subcommittee on Africa and global health.

Congressman Christopher Smith, who chairs the subcommittee, complained that some aid groups operating in CAR were doing so on an “absolute shoestring,” and that it was imperative to boost funding to such groups.

Richard said expanding the donor pool—such as in the Syria conflict, when Gulf states engaged on the humanitarian front—was a priority.

“We would like to see more countries who haven’t been traditional donors join us,” she said.

Congress appropriated $1.3 billion for total US Agency for International Development operations for 2014, about $215 million less than the 2013 level.