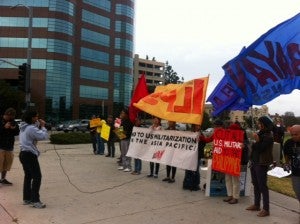 LOS ANGELES, California –Filipino American activists and their allies picketed in front of the Los Angeles Federal Building on Wilshire Blvd to show their disapproval of President Barack Obama’s two-day trip to Manila April 28-29. Obama’s visit will be the first by a U.S. president in 11 years.

that directly affect their families and homeland.”

“We are here as an international day of action to oppose Obama’s visit, the continued U.S. military presence in the Philippines and in the Asia Pacific Region,” stated Terrie Cervas, Gabriela USA, echoing the protesters’ militant counterparts in Manila.

The protest denounced the US Espionage Act, which they said has been used more than any other administration against whistleblowers, like Edward Snowden, who leaked information concerning U.S. government spying.

Snowden also revealed that the US had also set up surveillance facilities in embassies and consulates, including in Jakarta, Kuala Lumpur, Phnom Penh, Bangkok, Yangon, Manila, Hong Kong, Taipei, Shanghai and Beijing.

Activists also denounced US drone strikes for violating international law and the sovereignty of countries targeted by the strikes. The UN recently stated that the US drone operations involved the use of force on the territory of another state without its consent.

“The Philippines has been fighting U.S. imperialism since 1899,” said Kuusela Hilo of International League of People’s Struggle. “The Philippine-American war has been the template for U.S. occupation since then,” Hilo added.

Activists also denounced the US Joint Special Operations Task Force-Philippines that has been stationed in Mindanao since 2002. The Wall Street Journal recently defined U.S. military presence as “The 700-strong U.S. counterterrorism unit active in the southern Philippines as part of a post-9/11 agreement.”

“We have seen that the increase in military presence has only led to the increase of human rights violations,” stated Jewelle de la Cruz, vice chair of Anakbayan Los Angeles. “Our tax dollars are used to fund U.S. military joint exercises with the Armed Forces of the Philippines to continue counterinsurgency.”

Counterinsurgency exercises have been conducted in the southernmost area of the Philippines where the Mayor of Davao, Rodrigo R. Duterte, acknowledged he did not like “terrorist warfare” aimed against Muslim Filipinos in the region and that Filipinos locally have no problem with their fellow Filipinos who are Muslim.

“We have felt the impact of these neoliberal economic policies,” added de la Cruz. Our families are affected by these policies and have to choose between starvation and migration. We continue to feel the struggle of our mothers, fathers, uncles and aunts who have to work labor intensive jobs just so we, their children, can have something better,”

Also in the activists’ crosshairs was the US-led Trans Pacific Partnership Agreement, which they said was meant to seize markets in the Asia-Pacific region.

“In Mexico, when it came to Free Trade and saying it will help bring jobs and better the economy,” Ron Gochez, in solidarity with Filipino activists, “we knew that was false and that brought Latin America nothing more than starvation, misery, destruction and environmental destruction to our homeland,” stated.

“Obama is visiting to push the U.S. imperialist agenda” said Cervas. “He is meeting with leaders in the Asia-Pacific region that will further exploit and oppress the Okinawan people, people of South Korea, people of Malaysia, and our brothers and sisters in the Philippines. He is there to push the TPPA, amidst the economic crisis we are facing here in the United States,”

Activists in the United States have described TPPA as a more powerful version of North American Free Trade Agreement or “NAFTA on steroids.”

“We’re always talking about we’re going to set up an agreement, a free trade agreement, free for who?” stated Alex Montances of National Alliance of Filipino Concerns.

“The TPPA negotiations are carried out in secret,” Bayan USA said in a statement. “This is to achieve the US and negotiating parties’ objective of railroading the deal void of any direct intervention or scrutiny from the public, including civil society.”

“(Obama) wants to enhance the Defense Cooperation Agreement that will allow U.S. troops to be based in the Philippines,” added Cervas, stating the agreement will cause increase violence and human rights violations.

“We want to see a world where people can live happy, have food, housing, education and not have to worry about going to another country,” stated Montances.

“More than 10,000 people died and thousands others lost their homes because of under development, which means people are living in graves” observes Hilo, of the recent Typhoon Haiyan devastation.

“Under these conditions people have only one option, to fight for their needs,” added Hilo, who recently visited Manobo tribes in Southern Mindanao for a medical mission.