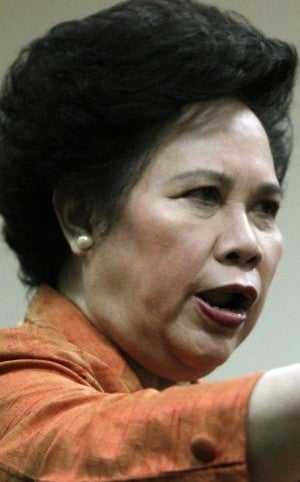 The Enhanced Defense Cooperation Agreement (Edca) would not make the Philippines beholden to the United States but would antagonize China, she said.

That the agreement was signed by Defense Secretary Voltaire Gazmin and US Ambassador Philip Goldberg came as an “unfair surprise” to the Senate, she said in a statement.

“This contretemps does not indicate good faith on the part of the two presidents,” said the chair of the Senate foreign relations committee.

Santiago has argued that such an agreement should first be submitted to the Senate, which she said shared the treaty-making power with the President.

Since the Senate has yet to be furnished a copy of the deal, Santiago said she had no basis for assessing whether the deal was “positive for my country.”

“The Senate has not been given the courtesy of being furnished a copy,” she said.

“I feel as if I have been slapped or ordered to melt into the wallpaper,” she added.

“America cannot have it both ways. It cannot tie down the Philippines to a mutual defense treaty and yet hope that it will not ruffle the feathers of China,” Santiago said.

The senator doubted that the deal would oblige the United States to rush to Philippine aid if attacked by China, which has been aggressively asserting its claims to the West Philippine Sea (South China Sea).

“For one thing, the MDT (Mutual Defense Treaty) does not define what is a ‘metropolitan territory’ of each state. For another thing, the MDT provides that the United States will come to the aid of the Philippines only after the issues have been passed through US constitutional processes, meaning that it is subject to open-ended debate in the US Congress,” she said.

Hundreds of protesters marched from Liwasang Bonifacio to Mendiola in Manila to express their anger and disapproval at the Obama visit and the Edca.

Members of the militant groups Bagong Alyansang Makabayan (Bayan), Karapatan and Kilusang Magbubukid ng Pilipinas burned giant effigies of President Aquino and Obama in the form of a dog pulling a chariot, which they claimed signified the US pivot to Asia.

“Obama’s visit in Manila is a reaffirmation of the more than a century of colonial and neocolonial relations, and the Filipino people do not stand to benefit from his presence and from more US troops in the country,” said Bayan secretary general Renato Reyes.

About 20 militants staged a similar protest at the Subic Bay Freeport Zone.

A suspected bomb was found inside the Bayview Park Hotel in Ermita, Manila, just across the US Embassy. Police confirmed that a device from a suspicious package taken from the fifth floor of the hotel was harmlessly detonated. It was unclear if the incident was linked to the Obama visit.

“The Aquino government’s decision to bank on a US-led militarized response to the conflicts in the West Philippine Sea is exceptionally foolish,” Akbayan party-list said in a statement, echoing the sentiment of leftist groups in the House of Representatives.

“Even the much-touted ‘Asia pivot’ strategy that the Edca will represent in the Philippines does not guarantee that the United States will defend us from China’s bullying in the region,” it noted.—With reports from Leila B. Salaverria and Maricar B. Brizuela in Manila, and Allan Macatuno and Tonette Orejas, Inquirer Central Luzon