No firm commitment from US to defend PH

MANILA, Philippines—Three hours before Air Force One touched down in Manila on Monday, the Aquino administration gifted US President Barack Obama with what he primarily came here for: a 10-year defense agreement allowing more American troops in the Philippines.

But in turn, Obama gave no categorical commitment whether the 62-year-old Mutual Defense Treaty (MDT) between the two countries—the backbone of the Enhanced Defense Cooperation Agreement (Edca) signed by Defense Secretary Voltaire Gazmin and US Ambassador Philip Goldberg—would apply in case the Philippines’ territorial dispute with China escalates into an armed confrontation.

Steering clear of the question, Obama instead pointed to Beijing’s “interest” in abiding by international law, saying “larger countries have a greater responsibility” to do so.

“Our goal is not to counter China; our goal is not to contain China,” he said in a joint press conference with President Aquino in Malacañang, reflecting a delicate balancing act throughout his weeklong trip that earlier took him to Japan, South Korea and Malaysia.

“Our goal is to make sure that international rules and norms are respected, and that includes in the area of maritime disputes.”

He said the objectives of the new deal were not limited to “issues of maritime security.”

Besides assisting the Philippines in disaster response, it would also cover “additional threats that may arise that we are able to work in a cooperative fashion,” he said.

In a speech during the state dinner, Obama said: “We are honored and proud to call you an ally and a friend. Through our treaty alliance, the United States has an ironclad commitment to defend you, your security and your independence.”

Unlike Japan, the Philippines, the United States’ oldest defense treaty ally in Asia, got no unequivocal statement from Obama that Washington would come to Manila’s defense in the event of an armed conflict with Beijing over the West Philippine Sea (South China Sea).

During the first leg of his Asian trip in Japan, Obama said: “Our commitment to Japan’s security is absolute and Article 5 [of the security treaty] covers all territories under Japan’s administration, including the Senkaku Islands.”

Obama reiterated his position that the United States had no “specific position on the disputes between nations.” But he said he was “very supportive” of the Philippine decision “to seek international arbitration that can resolve this in a diplomatic fashion.”

Worth more than a few rocks

“As a matter of international law and international norms, we don’t think that coercion and intimidation is the way to manage these disputes,” he said.

Aquino downplayed the dispute with China in the context of Manila’s economic and diplomatic relations with Beijing, saying it was “the only sour point in our relationship.”

“Trying to find a way and means by which we can both achieve our respective goals, which I believe are not or should not be mutually exclusive but rather should be inclusive if, at the end of the day, we do want to strive for the prosperity of our respective peoples,” he said.

“That I think has to be the primordial concern rather than disputes on a few rocks that are not possible to be inhabited,” Aquino said. 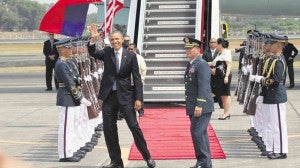 LAST STOP. US President Barack Obama waves as he arrives at the Ninoy Aquino International Airport on Monday, the last stop on his tour of the Asia-Pacific region that also took in Japan, South Korea and Malaysia. EDWIN BACASMAS

Under his so-called “pivot” to Asia, Obama said the United States was “renewing our leadership in the Asia-Pacific and our engagement is rooted in our alliances, and that includes the Philippines, which is the oldest security treaty alliance that we have in Asia.”

“Given its strategic location, the Philippines is a better partner on issues such as maritime security and freedom of navigation,” he said.

Obama insisted that the United States welcomed the “peaceful rise” of China, its biggest foreign creditor, pointing to their countries’ “constructive relationship” that involves “enormous trade” and “enormous business.”

“My hope is that, at some point, we’re going to be able to work cooperatively with China as well. Because our goal here is simply to make sure that everybody is operating in a peaceful, responsible fashion.”

Obama cited the “greater responsibility” of countries like the United States and China “in abiding by international norms and rules because when we move, it can worry smaller countries if we don’t do it in a way that’s consistent with international law.”

He said the four US allies he visited during his Asian swing had a singular message of resolving territorial disputes with China “peacefully and diplomatically.”

“If China, I think, listens to its neighbors and recognizes that there is another approach to resolve these disputes, what China will find is this—they have got ready and willing partners throughout the Asia-Pacific region that want to work with them on trade and commerce and selling goods and buying goods,” he said.

“And it’s inevitable that China is going to be a dominant power in this region just by sure size. Nobody, I think, denies that.”

Obama sought to allay fears in some Philippine sectors that Washington was reopening its bases in the Philippines, shut down in 1991. “I want to be very clear. The United States is not trying to reclaim old bases, or build new bases. At the invitation of the Philippines, American service members will rotate through Filipino facilities,” he said in prepared remarks.

Edca no threat to China

The idea behind the agreement was to work together to “build the Philippines’ defense capabilities,” Obama said.

To do this, Obama said American troops and their Filipino counterparts would “train and exercise more together” to be prepared for a range of challenges, including humanitarian crisis and natural disasters.

Aquino agreed with Obama. “First of all, I think China shouldn’t be concerned about this agreement, especially if you look at what is being contemplated, for instance, training, for instance, in disaster relief operations,” he said.

“The Americans have the V-22 Osprey aircraft, which has quite a significant upgrade in capabilities in terms of reaching out to very remote areas. We don’t have a comparable aircraft. We have smaller helicopters. And we have 44 of our provinces devastated by [Super Typhoon] Haiyan (Yolanda),” Obama said.

The Edca takes security cooperation, Aquino said, “to a higher level of engagement, reaffirms our countries’ commitment to mutual defense and security, and promotes regional peace and stability.”

Obama said the new deal was a way of updating “decades of alliance” between Washington and Manila in the 21st century.

“And the goal for this agreement is to build Philippine capacity, to engage in training, engage in coordination—not simply to deal with issues of maritime security, but also to enhance our capabilities so that if there’s a natural disaster that takes place, we are able to potentially respond more quickly,” Obama said.

“If there are additional threats that may arise, that we are able to work in a cooperative fashion,” he added.