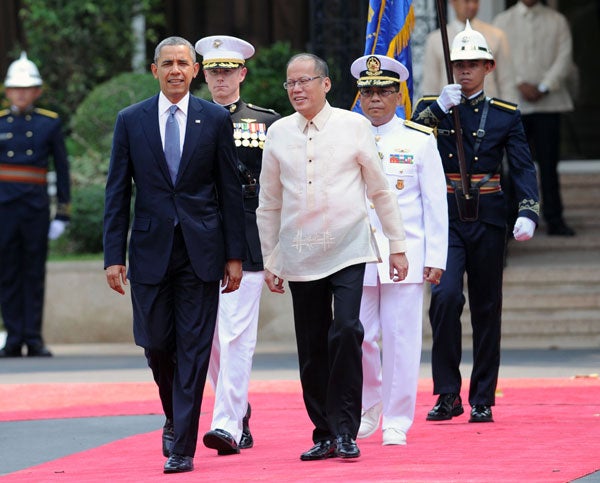 US President Barack Obama ( front, L) along with Philippine President Benigno Aquino walk prior to inspecting the honour guard during a welcoming ceremeony at the Malacanang Palace grounds in Manila on April 28, 2014. President Barack Obama landed in the Philippines April 28 to cement new defence ties on the last leg of an Asian tour conducted against a backdrop of territorial tensions between US allies and China. AFP

MANILA, Philippines – US President Barack Obama was welcomed by President Benigno Aquino III on Monday afternoon at Malacañang, the first stop of his two-day state visit in the country.

The two heads of state attended the customary Welcome Ceremony at the Malacañang Palace grounds around 2:15 p.m.

Obama arrived in front of Bonifacio Hall (formerly Premier Guest House) on a limousine, after traveling to the compound on the Marine One Presidential Helicopter from Ninoy Aquino International Airport (NAIA).

During the Welcome Ceremony, the national anthems of the Philippines and the United States were played while a 21-gun salute was being rendered.

The two leaders then inspected the troops, followed by the Commander of the Honor Guards sheathing his sword and saluting Obama to mark the end of the ceremony.

After the introductions, Aquino and Obama listened to the playing of Pangkat Kawayan (Bamboo Orchestra).

But before heading inside to sign the official guestbook at the Reception Hall, Obama took his time to shake hands with employees of the Office of the President who were waving flaglets of the US and the Philippines.

Both Aquino and Obama later entered the Malacañang Palace for the signing of the official guestbook before proceeding to the expanded bilateral meeting at the Aguinaldo State Dining Room.

During their meeting, they tackled various issues of mutual interest, including defense and security, trade and investment, tourism and development cooperation, before facing the media for a joint press conference.

The two presidents are expected to discuss the recently signed Enhanced Defense Cooperation Agreement (EDCA) that will give US forces access to Philippine military facilities. The document, which is said to advance the implementation of the PH-US Mutual Defense Treaty (MDT), was crafted as the US rebalances its forces in Asia amid increasing Chinese strength and territorial disputes in the region.

In the evening, Aquino will host a dinner reception for Obama attended by government officials and other special guests.