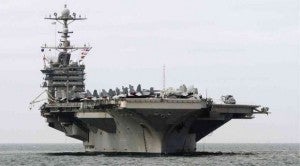 MANILA, Philippines—Three of the senators who rejected the renewal of the Philippine-US bases treaty in 1991 on Saturday expressed concern over the constitutionality of the new Agreement on Enhanced Defense Cooperation (AEDC) that is expected to be signed between the two countries during the visit of US President Barack Obama this week.

In a statement, former Vice President Teofisto Guingona Jr. and former Senators Rene Saguisag and Wigberto Tañada demanded that the agreement be scrutinized by both the Senate and the public. The statement was also signed by several lawyers and civil society members.

“The AEDC as reported by media threatens to reverse the historic Senate vote that removed the US bases in 1991,” read the statement signed by Guingona, Saguisag and Tañada, who along with nine other senators voted down a motion to renew the bases treaty 23 years ago.

The Aquino administration will sign the new agreement increasing the number of US troops in the country amid rising tensions with China.

“We call on our people to be vigilant, defend and uphold Philippine sovereign-ty, whether against China’s incursions or the United States of America’s increased military presence in Philippine territory,” the statement said.

“We express our grave concern over news that a new military agreement called the Agreement on Enhanced Defense Cooperation will be signed between the Philippines and the United States during the visit of US President Barack Obama,” they said.

The group expressed apprehension “that until now, no copy of the agreement has been provided to the public. Even Congress, particularly the Senate, has been kept in the dark.” Norman Bordadora

Rise in prostitution feared with return of US troops