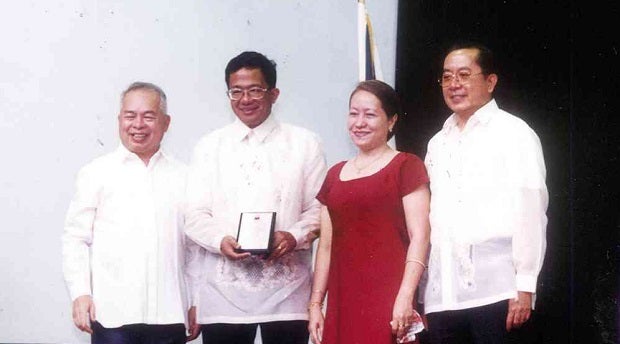 ALABASTRO, with wife Tess, receiving a citation during 2006 Independence Day celebrations with Sen. Juan Flavier as chief guest at the time and then Philippine Ambassador Enrique Zaldivar

An order to print wedding invitations at a colleague’s printing press along Avenida Rizal, Sta. Cruz, Manila, 24 years ago landed me an editing job in Brunei, where I am now the longest serving Filipino journalist.

“They are recruiting in Brunei. Just bring your biodata to this office along Pasay Road, Makati,” said Pat. I was interested.  My wife and I were raising, feeding and educating four children in a rented house on my P5,000 reporter’s monthly pay and her public school teacher’s salary.

“Brunei has no traffic, no night life, no pollution,“ the interviewer told me.  I managed to set up an interview as well for my wife, Teresita, and sister-in-law, Minerva.

So it was that I, Pat, and production supervisor Crispin Tacsuan reported for work at the Borneo Bulletin in Kuala Belait, Brunei’s oil town, on Aug. 20, 1990.  My wife was also accepted as a proofreader. But she conceived our fifth child, a son, and went home after one month. My sister-in-law worked as an accountant for a year with Brunei Press, publisher of the only English newspaper in town, found a husband, and raised a family of three in Brunei.

Kuala Belai is 120 kilometers away from the capital Bandar Seri Begawan or an hour-long travel by car on a smooth, highway. It looked like jungle on both sides of the road. 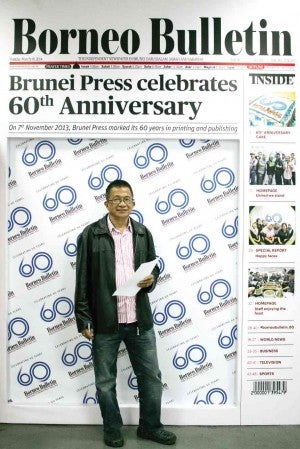 Small town Kuala Belait sleeps at 6 p.m. Everybody knows everybody. Everything was walking distance from our staff house: office, shops, public market, church, post office, bank, LBC remittance, beach, river. Except for additonal spices,  food was the same as in the Philippines—except  the price (the Brunei dollar is equivalent to P14). Cars are right-hand drive; nobody blows the vehicles’ horns. Cars stop as jaywalkers cross the road.

Work kept us busy. I monitored Manila radio stations deep into the night for news, even Philippine professional basketball games, which I wrote about in the sports page one day late.

At that time, the cellphone was not yet popular. Snail mail from Manila took 10 days to reach Brunei. The roar of the postman’s motorcycle was the best sound I waited for.  A B$10 telephone card was good for a three-minute conversation.

Living apart and matriculation fees challenged us. A bank loan without collateral, payable in 18 months, financed the yearly travel of my wife and five children to Brunei. Their travels stopped when  private high school and university tuition fees took priority. There was a time when we had to pay quarterly school fees for one of our children.

I see them once a year, during my Christmas and New Year leave. Over two decades later, leaving home to return to work in Brunei is still very sad and painful. I missed seeing the kids grow, their birthdays, and their elementary, high school and university graduations.

I am lucky to have a very good manager in my wife, who manages the house, along with nephews and nieces, in-laws, aunties or at least 20 people who live with us. They would later holiday and find jobs or  spouses  in Brunei.

We still live in a two-storey rented house in Paco, Manila, which is accessible to the universities our children graduated from, and is walking distance to the public school where my wife teaches journalism, and rolls out the annual school paper.

The Filipino Association in Brunei, which is older than the Philippine Embassy here, is active, especially during Christmas. It brings joy to homesick Filipinos. The Church of Our Lady of the Assumption in Bandar Seri Begawan is full of kababayan hearing the first Mass at 7 a.m.  or  exchanging tsismis (gossip) in the courtyard. Vendors sell kakanin, pan de sal, daing, dilis, tuyo, walis tambo, bangus and other Pinoy favorites a few steps away from the main gate on Sunday mornings.

The Philippine Embassy’s Filipino language and cultural enrichment program introduces OFW parents  and  children born and raised in Brunei  to new friends, while learning about Filipino heroes, myths and legends, and the latest craze in Manila.

I have become the embassy’s media partner, volunteer teacher and lecturer.

I have also watched the Borneo Bulletin rise from a small weekly newspaper to a modern daily newspaper in Brunei.  When we first arrived, the editorial office of the Borneo Bulletin was a small two-storey building  with a view of the river and ventilated by electric fans.  The editor, Sri Lankan journalist Rex deSilva, had told us he had been given a month  to transform the smally weekly into a daily by September 1990.  In 1996, the paper moved to the capital Bandar Seri Begawan. I have watched it grow into a modern media corporation.  Last year, the Borneo Bulletin celebrated its 60th anniversary with its electronic edition available online.

Looking back, my overseas job educated our children, gave us freedom to travel and allowed us to help others. A number of my relatives are now also in Brunei. We all enjoy a more comfortable life than that of our late parents.

However, our long distance relationship—24 years  and counting in a 35-year-old marriage—exacted bloody sacrifices. I have to admit that my wife had the more difficult role.  Yet tears, headaches and heartaches along the way have made us stronger and wiser, and closer as a couple.

Young Filipinos going abroad  today have all the conveniences absent in our time: cheaper fares, better opportunities, a support network of families, friends and contacts; instant and free communications, and a broader perspective.

I tell them: In another country, bloom where you are planted. Love your work, share your time and talent in your workplace and community, and thrive. Immerse in the local culture, learn the local language. Lead by being a good example. And don’t forget that balikbayan box of mementos to send home with the monthly remittances.