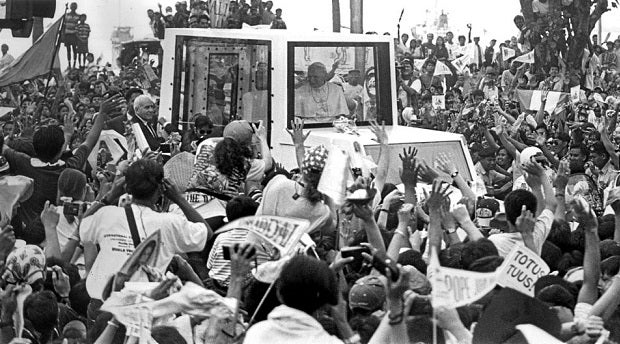 POPE John Paul II waves to the huge crowd inside his Popemobile during the 1995 World Youth Day in Manila. FILE PHOTO

The late Pope John Paul II, who served as Pontiff from 1978 to 2005, visited the Philippines twice—in February 1981, when he beatified the first Filipino martyr, Lorenzo Ruiz, and in January 1995, when an estimated 4 million Filipinos attended the Mass he celebrated at the close of World Youth Day.

He first visited the country in 1976, as Kraków Archbishop Karol Cardinal Wojtyla.

“The Filipino people are never far from my mind and heart,” the Pope said on his arrival in January 1995, when cheers of “Mabuhay” and “Viva il Papa” greeted him at the old Manila International Airport. The Polish-born Pontiff was then 74 years old.

“Father, look at your children eagerly awaiting the Holy Father,”  then Manila Archbishop Jaime Cardinal Sin said, gesturing toward the costumed schoolchildren who performed folk dances as the Pope’s plane taxied on the runway.

A crowd numbering in the hundreds of thousands lined the streets from the airport to Roxas Boulevard, Quirino Avenue and the Apostolic Nunciature on Taft Avenue to welcome one of history’s most beloved popes.

It was “the most rousing welcome ever given a visiting foreign dignitary that is yet unparalleled in the country’s history,” Inquirer columnist Ceres Doyo wrote.

Ahead of the Pope’s visit on Feb. 17, 1981, then President Ferdinand Marcos declared that he had “lifted” martial law.

On this visit, Pope John Paul II’s first agenda was to celebrate Mass at Manila Cathedral, after which he expressed to Cardinal Sin his wish for Manila Cathedral to become a basilica.

The Pope next visited the Our Lady of Perpetual Help church in Baclaran where he met with  religious women, and the archbishop’s  residence, Villa San Miguel, where he met with the Philippine Episcopate and Asian bishops.

The following day, the Pope delivered a message at Araneta Coliseum in Quezon City. He next addressed the Filipino youth at the University of Santo Tomas (UST), telling them that “[t]he Church is not frightened at the intensity of your feeling. It is a sign of vitality. It indicates pent-up energy, which of itself is neither good nor bad, but can be used for good causes or for bad.”

The Pope also addressed the poor in Tondo and later proceeded to Manila’s Rizal Park where he beatified Lorenzo Ruiz and other martyrs who were persecuted in Japan in the 17th century. It was the first beatification outside of Rome in history.

The Chinese Catholic communities in Asia and later, the Diplomatic Corps, had an audience with the Pope as well.

On Feb. 19, 1981, the Pope flew to Cebu City, where he met with the priests and seminarians of the Sacred Heart before celebrating a Mass for families at the old Lahug airport.

The following day, the Pope celebrated Mass for the community of Davao City before meeting with representatives of the Muslim community at the Davao airport. On the same day, he met with landowners and workers of sugarcane plantations in the reclaimed area of Bacolod City, as well as with representatives of Catholic organizations in the Cathedral of Jaro in Iloilo province.

On Feb. 21, 1981, the Pope visited a refugee camp in Morong town, Bataan province, and met with Vietnamese, Laotian and Cambodian war refugees. He then met with a group of lepers in Tala at Radio Veritas in Manila.  Over Radio Veritas, the Pope addressed the other Asian nations that have never had a pontifical visit, among them China, North Korea and Vietnam.  His message was a prayer for peace in these nations’ quest for prosperity.

The Pope later met with representatives of mass media and of other Christian churches in the Philippines and with the labor committees in the Apostolic Nunciature in Manila.

Pope John Paul II’s last day in the Philippines on Feb. 22, 1981, began in Baguio City with a Mass for indigenous tribes after which farewell ceremonies were held at Manila International Airport.

The Pope visited the Philippines again in January 1995 in time for the 10th World Youth Day. Some 3 million people lined the streets to welcome John Paul II, who arrived on Jan. 12, 1995.

The five-day visit was the Pope’s first overseas trip after he underwent an artificial bone implant in the leg following a hip injury in April 1994.

On his arrival, the Pope addressed the youth and invited them “… to [s]ee the world around you with the eyes of Jesus himself! The Gospel says that when he saw the crowds, he had compassion for them because they were harassed and helpless, like sheep without a shepherd.”

The following day, the Pontiff met with then President Fidel Ramos at Malacañang and later celebrated Mass for the 233 delegates of the International Youth Forum at Central Seminary Chapel of the UST.  He also gave a 20-minute speech to some 200,000 cheering students and academicians gathered at UST Grandstand and Parade Grounds.

“I see that it is my great privilege to be here, to be here and discover anew this phenomenon I knew before, and today I know better,” the Pontiff said.

During this visit, Pope John Paul II celebrated Mass to mark the fourth centenary of the Archdiocese of Manila and the Dioceses of Cebu, Caceres and Nueva Segovia at the Philippine International Convention Center grounds in Pasay City.

In a private meeting with members of the Catholic Bishops’ Conference of the Philippines, the Pope made the “strongest comments” defending the Catholic ban on artificial contraceptives. He also condemned the injustice in the country and noted the “increasing” gap between rich and poor.

“When powerful interests promote policies which are against the moral law inscribed on the human heart, they offend the dignity of man who is made in the image and likeness of God,” the Pontiff said. “In doing so, they undermine the foundations of society itself.”

On Jan. 15, 1995, a Sunday, the Pope arrived at Malacañang Park aboard the Popemobile from the Apostolic Nunciature on Taft Avenue, but was forced to ride the presidential helicopter along with Cardinal Sin and Papal Nuncio Gian Vincenzo Moreni to get to Quirino Grandstand amid the huge crowd on the streets.

At past 10 in the morning, the Pope began the three-and-a-half-hour Mass that marked the closing of World Youth Day. Attended by 4 million people, it was the biggest gathering so far in the Pontiff’s 16-year reign.

The following morning, the Pope left Manila for Port Moresby in Papua New Guinea.  In his farewell speech before some 10,000 people at the old Manila International Airport, the Pontiff said: “The Pope feels so well in the Philippines that he looks at another opportunity perhaps to return.”

He added: “I take with me a thousand images of the Filipino people.”

Read Next
Canada eases immigration rules
EDITORS' PICK
Smart three-peats as country’s fastest mobile network – Ookla
In good spirits: SMDC helps farmers and residents through Kadiwa Market
65% of Filipinos say Duterte’s health should be made public – SWS
DSWD chief admits ‘slow start’ in distribution of aid in ‘NCR Plus’
Pre-order the new vivo Y20s [G] to get a free TWS earphone
Would the military allow me to stay this long if I’m inutile? – Duterte
MOST READ
Vico Sotto frets getting photos of ‘butt vaccination’ from Pasig dwellers
Metro Manila to have shortened curfew hours from 8 p.m. to 5 a.m. under MECQ
San Miguel Corp. continues to invest heavily in the Philippines’ future
COVID-hit Roque slams ‘un-Christian’ query on how fast he secured hospital bed
Don't miss out on the latest news and information.