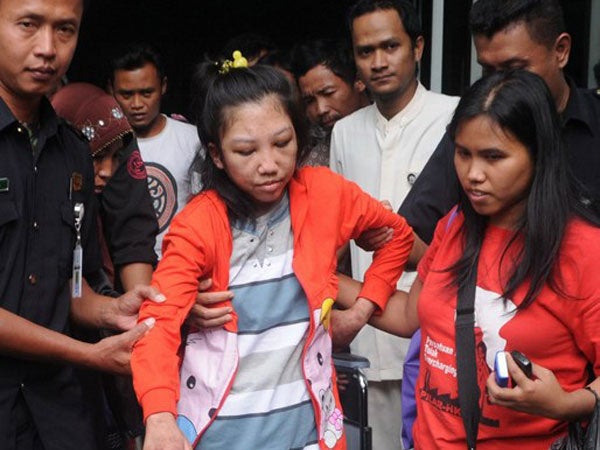 Indonesian maid Erwiana Sulistyaningsih (C), 23, is assisted out of the hospital in Sragen district in central Java island February 5, 2014. Sulistyaningsih, 23, who was allegedly tortured by her Hong Kong employer left hospital on February 5 after a month, tearfully expressing the hope that her case would prevent future abuse of “small people like us”. AFP

HONG KONG—Time magazine has named an Indonesian maid allegedly tortured by her Hong Kong employer as one of the world’s 100 most influential people, shining a spotlight on the city’s treatment of its migrant workers.

Erwiana Sulistyaningsih reportedly suffered months of abuse in a case which has renewed concern over the treatment of domestic helpers in the southern Chinese city and sparked angry protests.

Time magazine hailed Sulistyaningsih’s bravery in speaking out against her employer and pushing for laws that better protect maids in Hong Kong.

The 23-year-old was delighted at the news, telling AFP: “I give thanks to God, I am very happy and I hope more attention will be given to the fate of migrant workers throughout the world.

“I also hope that there will not be any more migrant workers who experience what I went through.”

“The inclusion itself only proves that the issue of migrant domestic workers, the slavery, the exploitation and abuse is something that the international community should pay attention to,” Villanueva said.

He described the situation as “ripe for abuse” in the city, where maids are required to live with their employers.

Villanueva also said Erwiana’s actions and her inclusion on the list would empower more victims to speak out.

Prosecutors have alleged that Law turned household items such as a mop, a ruler and a clothes hanger into “weapons” against her.

She was also charged with common assault and four counts of criminal intimidation — charges related either to Sulistyaningsih or to her two previous Indonesian domestic helpers.

The trial has been adjourned to April 29, with officials awaiting the maid’s medical records from Indonesia.

Sulistyaningsih was admitted to hospital in critical condition after returning from Hong Kong in January.

The Asian financial hub is home to nearly 300,000 maids, mainly from Indonesia and the Philippines, and criticism from rights groups over their treatment is growing.

Time magazine’s list also included Pakistan’s Malala Yousafzai, who survived a Taliban attack in 2012 when she was shot in the head by the militants for campaigning for girls’ education.