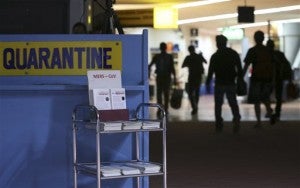 MANILA, Philippines — The male Filipino nurse who tested positive for Middle East Respiratory Syndrome-Corona Virus (MERS-CoV) when he was still in the United Arab Emirates tested negative here based on results of a confirmatory examination by the Research Institute for Tropical Medicine (RITM), according to Health Secretary Enrique Ona.

However, Ona emphasized that all those who travelled with him were still considered at risk.

Of the more than 400 fellow passengers of the nurse in the Etihad Airlines flight EY 0424, the DOH was able to trace and contact 119. Of those contacted, 72 were tested, with 40 having negative results, said Ona in a televised press briefing Saturday.

Ona said the nurse was “only a carrier” of the disease but tests as to whether he was infected with MERS-Cov turned out negative.

The nurse, who arrived in Manila last April 15, did not show symptoms of the illness although he had contact with another Filipino health worker who died from the virus in UAE.

Amid reports of spreading MERS-CoV, the DOH also formed a task force that would test possible carriers of the disease and to educate the Filipinos on the virus.

Ona said the same task force would also continue to test passengers who were on the same Etihad flight as the Filipino nurse.

The DOH also assured that there was no epidemic or outbreak of MERS-CoV so there would be no travel restrictions going to and from Middle East countries.

But the health department urged all OFWs coming home from Middle East countries to immediately seek medical attention once they feel flu-like symptoms such as fever, colds, coughing and sneezing.

The testing for MERS-CoV may take 9 to 12 hours, according to the health officials.

WHO warns vs spread of MERS-Cov, urges vigilance in taking precautions