WHO warns vs spread of MERS-Cov, urges vigilance in taking precautions 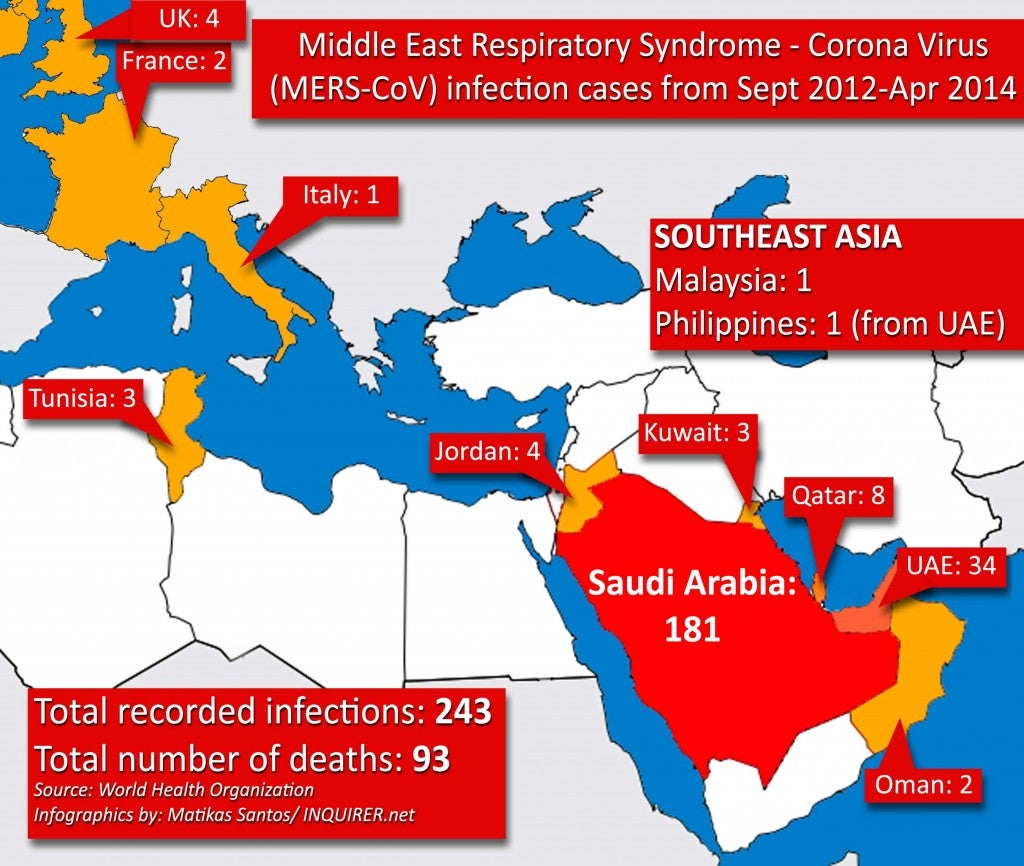 The World Health Organization (WHO) has recorded 243 infection cases of the Middle East Respiratory Syndrome – Corona Virus (MERS-CoV) worldwide as of April 17, 2014, the latest include a man in Malaysia who came from a pilgrimage in Saudi Arabia. He is the first confirmed case in Southeast Asia of the spreading virus.

MANILA, Philippines – With the recent death of a Filipino health worker in the United Arab Emirates (UAE) from the Middle East Respiratory Syndrome-Corona Virus (MERS-CoV) and the arrival of another infected OFW here, the World Health Organization (WHO) urged healthcare facilities and the general public to take precautions to prevent the virus from spreading further.

“Health-care facilities that provide for patients suspected or confirmed to be infected with MERS-CoV should take appropriate measures to decrease the risk of transmission of the virus from an infected patient to other patients, health-care, workers and visitors,” WHO said in its advisory posted on its website Friday.

“It is not always possible to identify patients with MERS-CoV early because some have mild or unusual symptoms. For this reason, it is important that health-care workers apply standard precautions consistently with all patients – regardless of their diagnosis – in all work practices all the time,” it said.

An OFW who arrived in the country Wednesday from UAE was found to have tested positive for MERS-CoV and was immediately placed in quarantine along with members of his family who picked him up at the Ninoy Aquino International Airport (NAIA).

The male health worker was tested by doctors in UAE but left for Manila before the results were released. The Department of Health (DOH) was immediately informed about the patient’s test results.

DOH Secretary Enrique Ona previously said that though the OFW showed no symptoms of the virus, they were tracing the people who have had contact with him on the plane to have them tested for MERS-CoV as well.

“We just want to make sure that these people had no MERS-CoV and had no symptoms. These are all precautionary measures,” Ona said.

WHO said that it has recorded 243 confirmed cases of MERS-CoV worldwide, including 93 deaths since September 2012.

“Patients should be managed as potentially infected when the clinical and epidemiological clues strongly suggest MERS-CoV, even if an initial test on a nasopharyngeal swab is negative. Repeat testing should be done when the initial testing is negative, preferably on specimens from the lower respiratory tract,” WHO said.

“WHO encourages all Member States to continue their surveillance for severe acute respiratory infections (SARI) and to carefully review any unusual patterns,” it said.

The public is advised to avoid going to farms where the virus is known to have infected animals and to practice proper hygiene measures.

“People at high risk of severe disease due to MERS-CoV should avoid close contact with animals when visiting farms or barn areas where the virus is known to be potentially circulating,” WHO said.

“For the general public, when visiting a farm or a barn, general hygiene measures, such as regular hand washing before and after touching animals, avoiding contact with sick animals, and following food hygiene practices, should be adhered to,” it said.

WHO advised governments to immediately notify them regarding new cases of infection as well as the possible exposure of people around whoever has been infected.

“All Member States are reminded to promptly assess and notify WHO of any new case of infection with MERS-CoV, along with information about potential exposures that may have resulted in infection and a description of the clinical course,” WHO said.

“Investigation into the source of exposure should promptly be initiated to identify the mode of exposure, so that further transmission of the virus can be prevented,” it said.

A Malaysian had reportedly died in his home town in the southern state of Johor after coming back from a pilgrimage in Saudi Arabia’s holy city of Mecca last March 29.

Despite the spread of MERS-CoV to Philippines and Malaysia, WHO said it would not yet recommend special screening at points of entry or recommend any travel or trade restrictions.