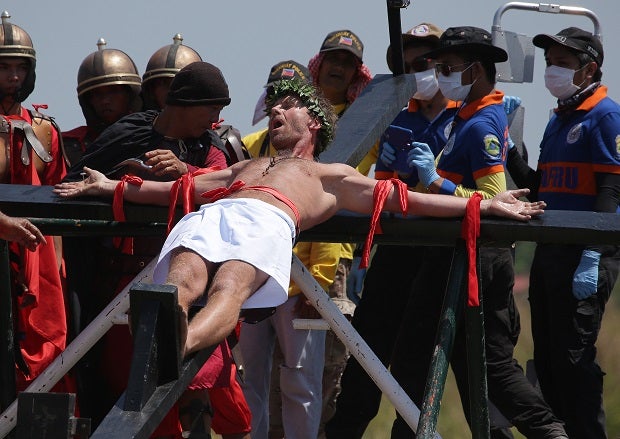 Danish national Lasse Spang Olsen, a 48-year-old filmmaker, grimaces as he is nailed to a cross to re-enact the crucifixion of Jesus Christ in San Pedro Cutud village, Pampanga province, northern Philippines on Friday, April 18, 2014. AP

Around the world, Christians are coming together in observance of Good Friday, which they believe was the day Jesus was crucified. 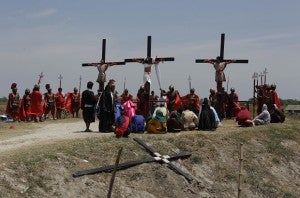 In the Philippines, Asia’s largest Roman Catholic nation commemorated the occasion by re-enacting the crucifixion. Devotees have themselves nailed to wooden crosses, rituals that church leaders do not condone but that draw huge crowds. Undeterred, some penitents participate in the practice year after year.

Devotees undergo the re-enactment in the belief that extreme pain is a way to atone for their sins, attain miracle cures for illnesses or give thanks to God.

In the Holy Land, Christians marked the day with prayers and processions, with thousands of pilgrims crowding along the Via Dolorosa, or “Way of Suffering,” carrying wooden crosses.

They end at the ancient Church of the Holy Sepulcher in Jerusalem. Tradition says the church was built on the site where Jesus was crucified, buried and resurrected.