OFWs in Middle East warned on spread of MERS 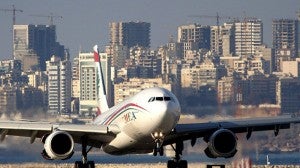 MANILA, Philippines—The Department of Foreign Affairs (DFA) warned Tuesday all Overseas Filipino Workers (OFWs) in the Middle East on the breakout of the deadly disease in the region that has claimed the life of a Filipino and affected five others.

“We are advising all Filipinos not only in the United Arab Emirates (UAE) but in the whole of Middle East to take precautionary measures against the deadly Middle East Respiratory Syndrome (MERS),” DFA spokesperson Charles Jose said in an interview with Inquirer Radio 990AM.

Jose, however,  told  OFWs to “remain calm” amid the spread of the deadly virus.

He said OFWs should practice proper hygiene, frequent washing of hands,   follow advisories from health authorities, and those who experience any of the disease’s symptoms are urged to immediately seek medical attention.

On Monday, the DFA confirmed the death of a Filipino from the deadly virus and the hospitalization of five others.

“The Philippine Embassy in Abu Dhabi has confirmed that one Filipino worker died on April 10 due to MERS, while five others remain under quarantine as a  precautionary measure,” Jose said.

The Filipino fatality, according to him, was a paramedic whose identity has yet to be disclosed.

“We withhold the name as per request by the family. We also have the name of the five Filipinos who are affected but their family also requested not to disclose their names,” he said.

The five Filipinos infected, he said, are “doing well and   recovering.

He assured that the Philippine Embassy in the Middle East is in close coordination with local health official to monitor the cases of the affected Filipinos.

The World Health Organization (WHO) has recorded  200 cases of the deadly virus and has 88 deaths all over Middle East.

According to the WHO, MERVS, similar to the Severe Acute respiratory Syndrome (SARS), was first reported in 2012 in Saudi Arabia.

WHO added that the symptoms of MERVS include fever, cough, shortness of breath, and even diarrhea.

Filipino in UAE dies from MERS