Day of Valor commemoration starts with opening of WWII memorabilia

• “We fought together,” a Pearl Harbor US vet tells Filipino comrades, “I hope you will consider me a brother” 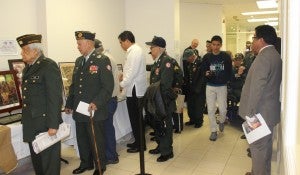 SAN FRANCISCO, California — A commemorative exhibit of World War II memorabilia opened at the Philippine Consulate with a short flag-raising ceremony Mon., April 7, in preparation for this week’s commemoration of Araw ng Kagitingan (Day of Valor).

A Philippine national holiday, Araw ng Kagitingan is celebrated on an annual basis in recognition of the heroic last stand of Filipino and American soldiers on the island of Corregidor during World War II.

“We deeply appreciate the sacrifice made by these heroic gentlemen in defense of our country,” he said, referring to the veterans in the audience. “They have truly set the bar for defining what it means to love one’s country, and fight for freedom.”

The short program also included remarks from Cecilia Gaerlan, a novelist and playwright whose “Bataan Legacy Project” seeks to draw awareness of the events surrounding the fall of Bataan, and the key role played by Filipino World War II soldiers in holding the line of defense against the assault of the imperial Japanese army.

“Many people remember only that Bataan fell, but do not know that if our soldiers had not held it as long as they had, the Japanese army would have penetrated the region even further, and we would be facing a completely different global political landscape today,” Gaerlan informed the audience.

“It is important for our community to be aware of the true story of Bataan and Corregidor, and give due recognition to our veterans for the role they played during World War II,” Gaerlan added.

Edgar de Leon, whose personal collection of World War II memorabilia was on display at the commemorative exhibit, added his own recollections as told to him by his father. He then introduced Chuck Kohler, a Pearl Harbor veteran who had been bequeathed a poem about the war by a Filipino World War II veteran.

“We fought together,” Kohler told the Filipino veterans. “I hope you will consider me a brother.” 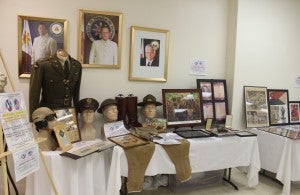 Following the program, Ascalon invited the veterans, together with special guests Attorney Lou Tancinco, supervising attorney for the Fil-Am Veterans Legal Clinic, Luisa Antonio and Esther Macaraig of the Veterans Equity Center, to join him in launching the World War II exhibit. Guests were then invited to the Philippine Center’s Social Hall for a light breakfast and get-together.

In partnership with Cecilia Gaerlan, the Consulate will also be holding a commemorative event on Memorial Day, May 26, from 2 p.m. to 4 p.m. at the Philippine Center. Announcements will be posted on the Consulate’s website and Facebook page once details of the event have been confirmed.

The Consulate will be posting a video clip of the commemorative event, as well as clips of interviews with Gaerlan, de Leon and Filipino World War II veterans, on its website and Facebook page, to lead up to the actual commemoration of Bataan Day on Wed., April 9.

On Bataan Day, farewell to a guerrilla