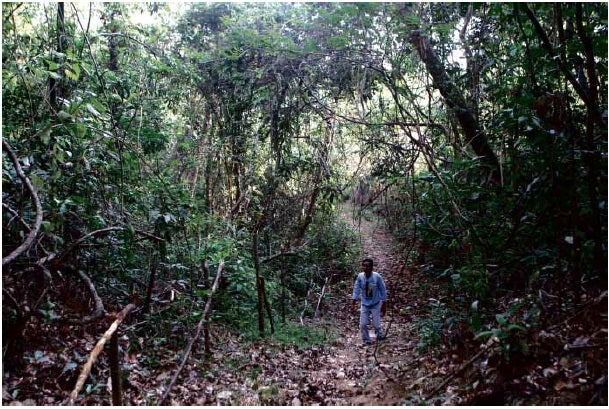 WAY TO THE CAVES Onoda Trail guide Gerry Villaflores shows the way to the caves inhabited by Lt. Hiroo Onoda, the Japanese straggler who hid in the jungles of Lubang Island for 30 years after World War II. LYN RILLON

MANILA, Philippines—In the book “No Surrender” that Hiroo Onoda wrote after surrendering in 1974 to then Philippine President Ferdinand Marcos, the Japanese officer detailed how he succeeded in convincing himself and his fellow soldiers Kinshichi Kozuka, Shoichi Shimada and Yuichi Akatsu that World War II wasn’t over, and that attempts to make them surface were enemy ploys to make them surrender.

Onoda was deployed on Lubang Island on Dec. 26, 1944, with orders to destroy the Tilik pier and airport to hamper enemy intrusion. But he failed in his mission, the Japanese intelligence officer said, because he met other soldiers on the island who outranked him.

When the Americans landed on Lubang in 1945, the Japanese surrendered shortly after, but Onoda and his group did not know this and stayed put, subsisting on fruits and animals that they found in the forest. They also “requisitioned” cows that they dried and rationed to last them several months, as well as rice, salt, roofing materials, clothes, needles, shoes, a radio set and other items left behind by farmers tending their farms near the forest. Sometimes, they would scare off the farmers and enemy troops looking for them by firing their guns.

One by one, Onoda’s compatriots left the group, either to surrender or be killed, until only he was left in 1972. Conserving what little was left of his munitions, he said he believed no bullet should be used to take his life; instead, they should be used to slay his enemies.

Reports say that Onoda and his comrades killed several people and wounded dozens of others as they warded off attacks by Philippine soldiers, policemen and civilians. The killings left bitter memories and anger among Lubang folk who lost relatives to the stragglers.

History, biodiversity on Onoda Trail
In The Know: Hiroo Onoda

Read Next
Inmates split on Enrile, Estrada, Revilla detention in regular prison
EDITORS' PICK
Would the military allow me to stay this long if I’m inutile? – Duterte
65% of Filipinos say Duterte’s health should be made public – SWS
Pre-order the new vivo Y20s [G] to get a free TWS earphone
In good spirits: SMDC helps farmers and residents through Kadiwa Market
Smart three-peats as country’s fastest mobile network – Ookla
DSWD chief admits ‘slow start’ in distribution of aid in ‘NCR Plus’
MOST READ
Vico Sotto frets getting photos of ‘butt vaccination’ from Pasig dwellers
Metro Manila to have shortened curfew hours from 8 p.m. to 5 a.m. under MECQ
San Miguel Corp. continues to invest heavily in the Philippines’ future
COVID-hit Roque slams ‘un-Christian’ query on how fast he secured hospital bed
Don't miss out on the latest news and information.