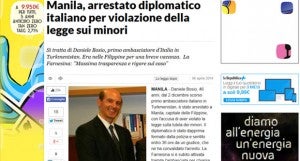 ROME — An Italian diplomat has been detained by police in the Philippines after allegedly breaching a law protecting minors, the Italian foreign ministry told AFP on Sunday.

Daniele Bosio, the Italian ambassador to Turkmenistan, was on holiday in the Philippines when he was detained, the ministry said.

He is accused of “violating a law to protect minors”, according to reports in the Italian media, although it was not confirmed in what respect the law is supposed to have been breached.

The 1992 law covers a broad remit covering everything from the exploitation of child labor to the possession of images of child pornography.

According to the website of the daily newspaper “La Repubblica”, citing a police source in Manila, the allegations relate to three children, although the paper did not specify the nature of the accusations.

The paper said the diplomat denies the allegations.

Special law to pin down foreigner for child abuse