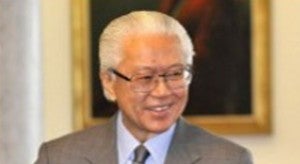 MANILA, Philippines—It was “a small gesture of friendship and solidarity” with a neighbor in need, Singapore President Tony Tan Keng Yam said of his country’s donation to those affected by Supertyphoon “Yolanda” five months ago.

Tan on Friday handed over some S$7 million  or P231 million in donations to partner organizations in the Philippines to support a package of reconstruction and rehabilitation projects in areas affected by the supertyphoon in Eastern Visayas.

Tan, who was on his first state visit to the Philippines, did not issue remarks at the event but said in a press statement that the funding package was a “small gesture of friendship and solidarity with the Filipino people.”

“These may seem small in the greater scheme of the rebuilding effort, but they are huge gestures of friendship and reflect the spirit of solidarity of the Singapore people with the Filipino people,” said SRC secretary general Benjamin William during the turnover ceremonies.

“As the funds flowed in, it was clear to me and my colleagues that the people of Singapore shared the grief and suffering brought about by Yolanda and wanted to reach out to touch the lives of [those] in need,” William said, adding that contributions of varying amounts poured in, “from as big as a million dollars from a successful businessman to a 10-year-old schoolgirl giving her entire savings of pocket money.”

Singapore’s partners in the Philippines are set to implement a package of projects including housing, medical facilities, water and sanitation, and the repair of homes and schools across the disaster zone.  Expected to benefit from the package are some 1.5 million Filipinos from the typhoon-hit communities on Bantayan Island in Cebu province, Busuanga Island in Palawan province, Leyte province, Ormoc City, Panay Island and Samar province.

“The outpouring of support is heartening but we must remember that the work of rebuilding communities goes beyond fund-raising.  It is a commitment that can stretch over years,” William said.

“We hope that all the rebuilding and rehabilitation projects supported by  Singapore Red Cross and the people of Singapore will make a lasting difference to the people of the region… We hope that each and every project will represent relief and new hope,” he added.