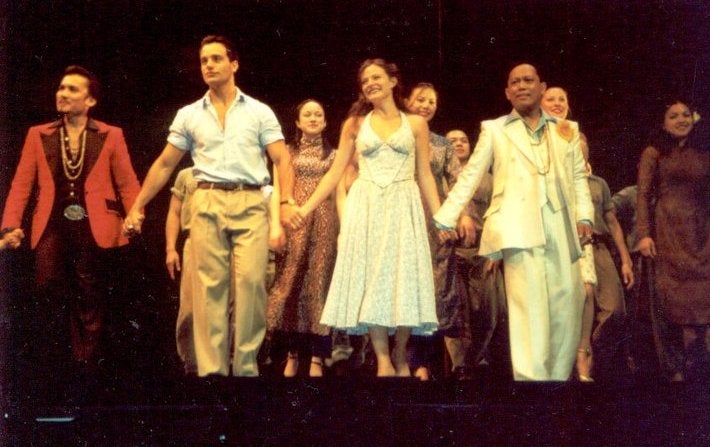 “Salamat, Salamat, New York,” (Thank You, Thank You, New York) features an international cast and fashion designer Arielle Agasang’s haute couture collection. It is produced by the nonprofit organization Filipinos in the Arts in America, Inc. (FilinArts), in cooperation with Queens Asian Fest.

Braganza has conceptualized and choreographed the show and is directing it as well. Lighting design is by Alex Denevers, sound design by Edmundo Quinones and additional choreography is by Qi Min, Rowena Bontor O’Mary and Rolly Postadan.

Part of the proceeds from the dinner show will go to various arts programs developed by FilinArts for Filipino American youths in the New York Tri-State area. FilinArts  promotes and presents works of Filipinos and Filipino-Americans. It also trains young artists, creates performing opportunities and community development through cultural exchange programs and professional productions in music, dance, theater and fashion.

Originally from the Philippines, Braganza was Walter Terry scholar in the dance performance and choreography program at Harvard University in the ‘80s. He was assistant to Tony Award-winning director John Dexter in the original Broadway production of “M. Butterfly” from 1988-1990.

Braganza joined the cast of the U.S. and international productions (Germany, Canada, UK, and Portugal) of Cameron Mackintosh’s mega-musical “Miss Saigon” for 14 years. The feat, he says, made him feel “so blessed” and inspired him to teach young and up-and-coming artists, build libraries and promote arts programs both in New York and in the Philippines to this day.

“For the last three years, besides supporting about 40 musical theater and dance scholars at Julie Borromeo Performing Arts Foundation in Manila, I’ve also been collaborating with various foundations and nonprofit organizations in the Philippines, giving out free arts workshops for Filipino youths,” Braganza explains.

“I’m also thrilled that my pilot project ‘Street of Dreams: Library and Arts in the Park for the Youth’ in Santa Ana, Manila will also be adopted by more than 10 libraries in nearby neighborhoods,” he adds, “but I need your help to sustain these projects.”