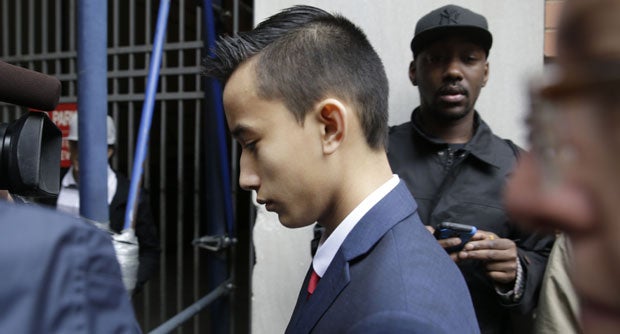 Justin Casquejo arrives for his court date in New York, Wednesday, April 2, 2014. The 16-year-old boy described as a thrill-seeker bypassed an inattentive security guard in the middle of the night and climbed a ladder to the spire of 1 World Trade Center, where he apparently took pictures, authorities said. AP

NEW YORK — A teenager who climbed to the top of 1 World Trade Center will be assessed in a program for youthful offenders.

A judge on Wednesday ordered Justin Casquejo to return to court April 30. He and his lawyer declined comment outside court.

The 16-year-old from New Jersey was arrested last month. Authorities say he was dressed like a construction worker when he squeezed through a hole in a fence at about 4 a.m. and took an elevator to the spire.

Three other people parachuted from the building in September.

Read Next
Do you know the way to Kiribati? Its head of state was here to study ‘Yolanda’
EDITORS' PICK
Complete your early Christmas shopping with vivo V25 Series
The vivo Y16 makes the season of giving more thoughtful for the whole family
What’s in a name? ‘Maharlika’ evokes time of mythmaking
House energy committee chair Arroyo bats for cheap electricity
Easterlies to bring rain in PH on Sunday — Pagasa
China’s Xi unwilling to accept vaccines despite threat from protests — US intel
MOST READ
Maxene Magalona sees separation from Rob Mananquil as ‘blessing in disguise’: ‘There’s no more anger’
Are we ready for a sovereign wealth fund?
SC sets 2023 Bar exams on Sept. 17, 20, 24
What’s in a name? ‘Maharlika’ evokes time of mythmaking
Don't miss out on the latest news and information.